Knuckles' Chaotix prototype 0111 for the 32X was released by drx during the massive February 23rd, 2008 prototype dump. Its compilation date is January 12, 1995.

The title screen is largely the same as the previous two builds, but it has some minor differences:

The gameplay is also different in this prototype.

Door Into Summer has a different mix than the final.

Tribute in the final is known as "??? GOOD ENDING ???" in the prototype, indicating that Tribute was to be used instead of Just Another Day. The proto mix is quite different from the final mix.

Just Another Day in the final is referred to as "??? STAFF ROLL ???", indicating that the staff roll would originally be separated from the ending scene. There are also differences in the drumming.

Oriental Legend has an extended intro. The harps loop twice for each key, unlike the final. 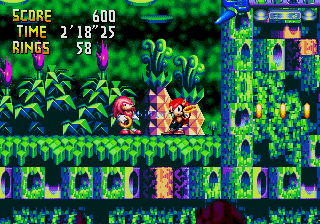