This is a sub-page of Proto:Mario Kart DS/USA Kiosk Demo.

While normally you can only play the Mushroom and Shell Cup in Grand Prix Mode, all 5 modes can be accessed with the Debug Menu.

The first screen is the mode selection. Unlike the final menu, you select the modes with Left and Right. Another small difference is that Battle Mode and VS Mode are switched. 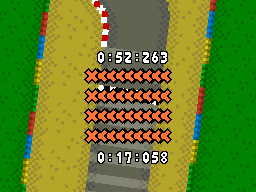 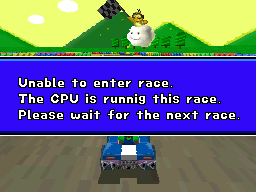 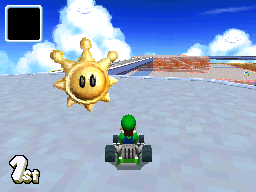 Versus seems to be more focused on Multiplayer mode in this build. 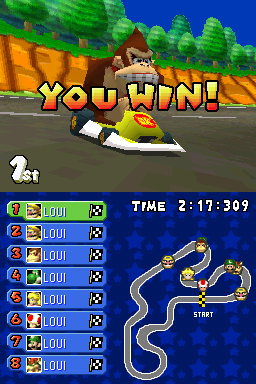 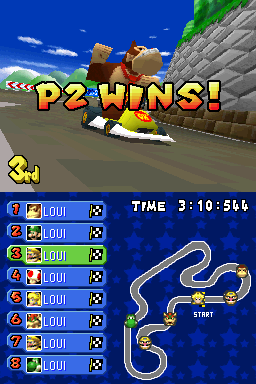 Mission 1
Takes place on GCN Yoshi Circuit. There's two pipes near the middle of the course and you must drive through them in 25 seconds or less. This mission is slightly bugged, though - the player is supposed to be playing as Yoshi at 100cc, but instead the game loads Mario at 50cc. This makes the mission very brutal to complete. However, when playing this mission from the debug menu, if the player were to select missions, press Right or Left once, go back to the first mission and play the mission, the mission will load with the correct settings. You'll have to do this every time they want to play this mission, or it will go back to Mario on 50cc.

This mission doesn't exist in the final.

Mission 2
Takes place on N64 Moo Moo Farm. There's six Goombas here, and the player must destroy them with triple red shells in 30 seconds or less.

This mission is 3-6 in the final, although it has been heavily redesigned with the objective being changed to Monty Moles instead of Goombas.

Mission 3
Takes place on Shroom Ridge, although there's an issue with this mission - everything is set to an older version of Shroom Ridge; all objects were placed much lower. This makes the mission impossible to complete. However, with Suppastario's Drive Anywhere code it's possible to complete the mission. The player has to reach the finish before the red car (aka "complete one lap") in 49 seconds.

Mission 4
Takes place on Peach Gardens. The player has to reach the finish before the Chain Chomp does (aka "complete one lap" in 44.5 seconds.

Mission 5
Takes place on SNES Mario Circuit 1. The player has to collect all 50 coins in one minute. Interestingly, Luigi uses his Poltergust 4000, although in all other missions (final and proto versions), the drivers only use their Standard Kart.

This mission doesn't exist in the final.

Mission 6
Takes place on N64 Moo Moo Farm. The player has to collect all 40 coins in 50 seconds.

Mission 7
Takes place on a slightly harder version of Tick-Tock Clock. The player has to complete two laps in one minute 40 seconds.

Mission 8
Takes place on Airship Fortress. The mission is bugged - there's twenty Rocky Wrenches here. The player can complete the mission by hitting a Rocky Wrench with a star, running into one, or by sitting on top of one. The player has one minute to do this.

Mission 9
Crashes while loading because Mr_stage1 is broken. It's a boss battle with Big Bully.

Mission 10
Takes place on mini_block_course (GCN Block City). Like mission 9, it's a boss battle with Big Bully. In this case, the player has 17.5 minutes to use mushrooms to push Big Bully into a hole in the course.

Since Big Bully hasn't been programmed yet, he doesn't appear, rendering it impossible to complete the mission.

This mission still exists in the final game's files, but it's still unused. However, since Big Bully is fully programmed, with some ROM hacking it can be played and completed.

Below is a list of the karts that can be chosen in the Kiosk Demo debug menu, using Left and Right. The numbers on the left are the button presses needed to select that kart, if your character selected is Mario. The kart selection resets to the selected characters' default kart every time the debug menu is loaded. "- Mario" indicates that is Mario's default kart, "- DK" is DK's default kart, etc. *CRASH* means the game will crash if this kart is selected. The reason for some karts crashing the game is, that they are lacking a shadow model.

If you go to mission 1 in Debug Mode (press A twice), sometimes (or always) the water will disappear in this mission, most likely due to buggy NKM.

Retrieved from "https://tcrf.net/index.php?title=Proto:Mario_Kart_DS/USA_Kiosk_Demo/Early_Modes&oldid=947187"
Categories:
Cleanup > To do
Subpages