This is a sub-page of Proto:Mario Kart DS.

Early in development, Mario Kart DS resembled Double Dash!! much more than it does in the final; these connections can be seen both in-game and unused in this kiosk demo that was used in stores prior to the game's release. On another note, this build is very similar to the E3 2005 demo version(s).

The top screen was unchanged, but the bottom screen is different compared to any released version as it only has a basic copyright.

The most notable difference is the different logo, which is the same logo from the older Mario Kart games.

The graphics and fonts used in the cup selection are different in the Kiosk Demo. All cups are absent except the demo cups Nitro and Retro, which are the final game's Mushroom and Shell cups.

The course names are still written with the Kiosk Demo font in the Korean version of the final game.

The boot-up banner is also different. It depicts Mario and his kart with their models from E3 2004 (which tends to borrow from Mario Kart: Double Dash!!), rather than the final design.

Nearly all of the item icons were redrawn and/or enlarged. Additionally, the demo uses a few textures from Mario Kart: Double Dash!!. The Blooper also has its appearance from Super Mario Sunshine.

Donkey Kong is called "DK" and has his voice clips directly from Donkey Kong 64 in the demo. Also, Wario has his original long-sleeved shirt in the demo from past Mario games. The icons on the character select screen were spread out in the final version. Most icons are slightly cropped, Toad and DK's faces are redrawn, and Yoshi is smaller overall for the final version. A single pixel is changed in Wario's icon.

The prototype says GO! while the final says START.

The countdown numbers and the goal text are bigger than in the final, but are lacking in detail and paler.

While not appearing in the demo menu, these can be accessed using the below Action Replay code (where "XX" is the ID). Press Select at any time to activate the code.

Pressing the S on the bottom screen shows 4 options:

1. Option: Save and go to Driver Menu

2. Option: Go to Driver Menu without Save

3. Option: Save and continue

4. Option: Continue without Save

However, the emblem is only black and crashes on real hardware, most likely due to a missing palette file.

ID: 04
Internal Name: Menu
A debug menu is present in the Kiosk Demo which contains many features. The menu used in this demo is called E3Menu and the menu used in the final is called Menu, like this debug menu. More information can be found on the the Early Modes sub-page. 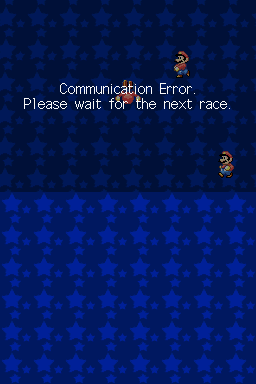 ID: 05
Internal Name: Test
This screen shows an early communication error screen with some testing features on the bottom screen by pressing X. These include a bottom map test of GCN Yoshi Circuit, a drawing test, and a test showing Japanese text in red. The red text (あいうえお かきくけこ さしすせそ) contains the first fifteen letters of the hiragana script, which is the equivalent to the first 15 letters of the alphabet. The white text (仮ポーズ) means temporary pause.

ID: 06
Internal Name: Unknown or none in game
Shows the current name of the DS console. Purpose unknown. 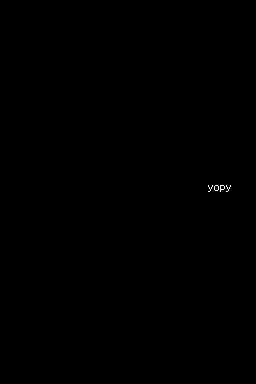 ID: 07
Internal Name: Unknown or none in game
A blank screen. Pressing A or Start will take you back to the Title Screen.

ID: 0B
Internal Name: Record
Another blank screen. Every value after this one crashes the game.

Yoshi was originally of medium weight class (evident by the values in KartModelMain.carc/charphysicalparam.bin file), but ended up being light in final. 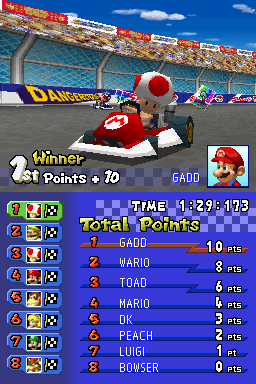 Professor E. Gadd was going to be a playable character in Mario Kart DS, but was later replaced with Dry Bones. He uses Toad's models, graphics, and voice clips with Mario's kart decorations and large portrait. His ID is 0x08.

All characters use their Standard kart in the Kiosk Demo, rendering the alternate versions unused. Karts from the second category do not exist yet and are using duplicates of the Standard Kart (except Poltergust 4000).

These karts still exist in the final game's files as they can be found in the unused KartModelMenu.carc and KartModelMain.carc archives.

All cups from the final game are present in the Kiosk Demo. The Shell, Banana, Leaf and Lightning cups were called SNES, N64, GBA and GCN Cup and they only featured the courses from the corresponding console.

It's worth noting that SNES Koopa Beach 2 and Choco Island 2 were swapped around at some point as indicated by the course order of the SNES cup. 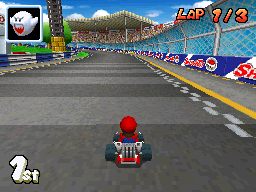 This item exists both in this prototype and in the final game but it cannot be obtained under usual ways. It is possible to obtain it with AR codes, but attempting to use it crashes the game. 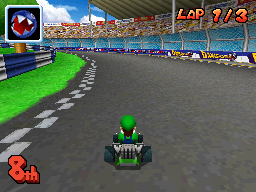 The Chain Chomp from Mario Kart: Double Dash!! makes a small appearance in this demo, but was later replaced with the Bullet Bill. While the item does flash by in the item roulette (as seen in this expertly-timed screenshot), you cannot receive it. It is possible to obtain it with AR codes, but attempting to use it crashes the game.

A texture for the Bowser Shell from Mario Kart: Double Dash!! can be found in the game's files as well. However, this item does not appear in the item roulette, as there is no data for it.

A texture which shows a purple Koopa shell. Again, there is no data for such an item. A small icon of a triple purple shell for use on the item roulette and the bottom screen exists.

Each of the three unused items has a corresponding bottom-screen icon. Note that only an icon for Triple Purple Shells exists - there is no icon for a single Purple Shell, proves the item was planned to only have a triple variant.

Item IDs 0B and 0D appear as Green Shell in the item machine and your character's icon in the racers list. They can be achieved using AR codes, but using them crashes the game. The ID for the actual Green Shell is 00.

The following video shows these unused items in action:

Text used by the early characters.

Present in root/Data/Scene/Test.carc/Test.carc/test.bmg, a file which itself goes unused.

"Under construction" was likely used as temporary text for undeveloped missions.

The final's mission descriptions don't have the "Time limit" line, and the Chain Chomp mission's description here is the only one kept in the final.

Found in /Scene/Test.carc is some sort of script under the file menu.scr.

There is an unused Shy Guy model which appears to be unfinished. It is in the same folder as the Yoshi model that was used as a placeholder model for Shy Guy.

The date when the demo was compiled, present in root/data/Boot/builddate.bin. This is shortly after E3 that year, which reflects its similarity to the E3 2005 demo.

These all seem to be taken from screenshots which were publicly released in late 2004/early 2005.

Retrieved from "https://tcrf.net/index.php?title=Proto:Mario_Kart_DS/USA_Kiosk_Demo&oldid=1359228"
Categories:
Cleanup > To do
Cleanup > Works In Progress
Subpages