I have this funny feeling that the Dokan Course was taken directly from F-Zero X because of how the track is laid out and how textures are used. However, I haven't seen a matching track yet (I haven't played F-Zero X in awhile though). Does anybody else feel that this may be true? --Dr.MarioX 20:37, 4 August 2012 (EDT)

While the pipes do fit with the games, I really doubt it is from F-Zero X. It seems too much that it was designed specifically for this game, with narrow road on the turns and relatively tame changes in elevation, not to mention no crazy gravity changes. I also really doubt it is a "test" map as the article currently states. --Peardian 11:17, 19 July 2013 (EDT)

Why has no one put this in the page yet? It should be classed as unused as you cannot hear it during normal play (as you must use a code to hear it or you need to look in the sound_data.sdat.) It is a placeholder song, which is used on all the unused courses and courses without their own music in the demo (DK Pass, Rainbow Road, etc.) --User:luigi442wii

I don't know any other way to do this apart from converting jimbo390's SEQ_CIRCUIT2 video on YouTube to MP3 then converting the MP3 to OGG. The only time I used OGG was when I once had a netbook running Linpus Linux Lite, and I don't have that anymore. -- Luigi442wii

The YT video will be fine, as long as it is the original unedited track and is converted to OGG with Audacity (which is cross-platform). But I will do it now.--Hiccup 05:08, 19 July 2013 (EDT)

Considering how all the music in this prototype is different from the final, due to either tempo changes or soundfont changes, I'm surprised no one has put up ALL the music from this prototype, like was already done for the Sonic 2 Simon Wai prototype. There's also many themes from the final that are in the prototype's data, but unused (again, similar to that Sonic 2 proto)Geno2925 18:54, 8 August 2013 (EDT)

Debug Menu and other stuff

The wiki that originally held these details seems to be down, so I'll be sharing these vague notes that I kept.

fourth screen - kart modifier, up and down to change entry, right and left to change values

fifth screen - no idea, 4 entries to choose from, x changes which character you will take control of

second screen - character modifier, up and down to change entry, right and left to change values

third screen - kart modifier, up and down to change entry, right and left to change values

Codes that force which cup you choose:

As you can see, the cups were originally ordered by console.

And another code, which lets you play as "E.Gadd", who uses toads model as a placeholder

About those Placeholder Menus

I think someone at dshack.org did and it simply loaded a black screen. Also they don't function, because they're just static images. --Termingamer2-JD (talk) 10:39, 10 August 2015 (EDT)

the debug font is back!

i found at /data/boot the files: dbgfont.NCGR and dbgfont.nclr combined they are the debug font! — The preceding unsigned comment was added by Harmjan123 (talk) • (contribs) 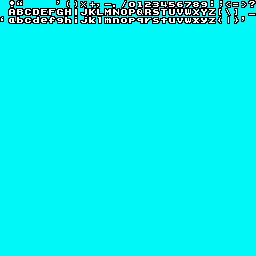 So, recently I went into the game's files and found something very interesting, leftover horns from Double Dash for each character and a strange sound called "Driver_Change". It was possibly used to switch between characters early in development. Driver Change is not from Double Dash because it's a sound effect, and in Double Dash when you switch drivers by pressing Z, the character says their name. I posted it on the page, but I could use some help extracting the files out of the .ssar. This and the unused menus made me think that early in development, Mario Kart DS was Mario Kart: Double Dash DS with 2 characters instead of 1. I think this was scrapped because the DS couldn't handle it. Someone please help with the .ssar. Also, what do you guys think about my theory? --Francofantino (talk) 16:21, 3 September 2015 (EDT) Dig more into the files and see if you find anything that might be relevant to Double Dash!! Donetsu52 (talque) 22:00, 14 August 2015 (CST)

Has anyone seen if the debug menu loads in the final game? Also, has anyone tried loading the debug font into the debug menu? --Francofantino (talk) 16:21, 3 September 2015 (EDT)

The debug menu loads but all the commands are removed. I don't think anyone has tried the latter, though, but I don't think any data exists to display text in there anymore. --Termingamer2-JD (talk) 14:40, 24 October 2015 (EDT)

Here's things in the SeqArc folder in the kiosk:

These all seem to relate to the multiplayer thing from GDC 2005, which is partly in this build. Also an error message can be triggered by going to the debug menu's VS Mode.

The menu which displays your name only shows 4 characters and is actually a multiplayer remnant when you connected with each other, but the actual wireless link doesn't work.

I found what appears to be the MKDS E3 demo at www.handheldy.cz. What's strange is that it's european, but E3 takes place in the US. I think it's the E3 demo because it says it has multiplayer, just like at E3. It has the product code DIS-NTR-AM3P-EUR instead of the US kiosk being DIS-NTR-A39E-USA. If anyone here owns this, all I ask is that it gets dumped, and searched through for unused things. --Francofantino (talk) 09:19, 7 November 2015 (EST)

That's probably the build seen in the GDC 2005 multiplayer video, and the picture was taken from a camera, so if it's ever found then that would be interesting to dump. Or perhaps there were two demos, this one being the singleplayer demo (there's a lot of data relating to multiplayer connections in this ROM which don't work anymore), and the one in the website being a multiplayer version of it.

Erm, look what this is on ebay: http://www.ebay.com/itm/Mario-Kart-DS-Nintendo-DS-Japan-Kiosk-Rare-NOT-FOR-RESALE-FREE-S-H-/262140027630?hash=item3d08c362ee:g:oKEAAOSwk5FU1OLf
Japanese version, code NTR-A39J-JPN. It MIGHT have the same content as the US version seeing as its ID is A39* but it's still a kiosk all the same. Also it might be good to check out the word 'not for resale' anyway because a lot of results come up, for other MK games.--Termingamer2-JD (talk) 15:08, 24 November 2015 (EST)

Yes. If the ID (A39) is the same then the ROM is same too. No matter what's the rest of the cartridge number. The only difference could occur if there is a revision version of the code which could be identify by the back number code. However it's not likely that a Demo cartridge gets a revision.--Michal99 (talk) 08:08, 1 August 2017 (EDT)

The four letter code on the back of the cart plus the revision number is what tells you what ROM it has. The last digit of the four letter code on the back does matter. You can see examples of this in all (or most) DS games - the ones with J on the end are different to the ones with U (or whatever) on the end. This has been dumped and you can find the checksums in the No-Intro "Nintendo DS" dat under the name "Mario Kart DS (Japan) (Demo) (Kiosk)". It is post-release and the revision number in the ROM data is 0 (so probably 0 on the back of the cart too). You can see the build date on the main page. :) --Hiccup (talk) 10:30, 1 August 2017 (EDT)

I found the ROM of the Japanese kiosk demo version that was talked about some time ago above. Should I provide a link to it, considering that it has been built at the same time the final build was released? --Rosalina (Talk) 20:30, 19 July 2017 (EDT)

The screenshots that were added of Desert Hills, Peach Gardens act, were by no means screenshots of any actual prototype, but rather from a ROM hack that modifies some elements of the game in an attempt to recreate it, going off of unfinished bottom screen maps, which can be poor references themselves due to their poor quality, and being unfinished, And the fact that nobody has said E3 prototype, plus the were falsely labeled as being from E3, despite the fact that courses like SNES Choco Island 2, and Peach Gardens weren't even shown off at the E3 in question. The screenshots that were removed should not be added back as a result, if this article aims for historical accuracy. Especially considering that the fan recreation they were taken from is of somewhat poor quality.

i found a sound from mario kart double dash in WAVE_SE_GLOBAL.swar! the sound after sound 0 (sound 0 is an instrument sample) is the sound that plays when lakitu drops the cheep cheep in the intro of mkdd, does anyone know why this is here? MrDecrypter (talk) 16:14, 11 March 2019 (GMT)

ROM is lost I think