This page details one or more prototype versions of Monster Party.

After repeatedly falling into the hands of collectors that were unwilling to release it to the public, a Japanese prototype of Monster Party (titled Parody World: Monster Party) was finally released on July 3, 2014 for everyone to enjoy. As the original title implies, the prototype features many parodies of movies like Gremlins and Planet of the Apes that were unfortunately removed for copyright reasons, as well as a number of other differences.

The prototype's title screen was a rather gory affair, with blood dripping all over the place. This was changed to green slime in the US version, which was apparently enough to fool Nintendo's censors, as the rest of the game beyond this point is just as bloody as the original.

In addition to the slime change, two menacing eyes were added above the logo, the copyright/licensing information was updated and expanded, and the zombie face cursor was changed to a happy jack-o'-lantern.

The main character, Mark, was originally named Hiroshi in the prototype, and had a hiragana "ひ" on his shirt in cutscenes to match. This was changed to an "M" when the character was renamed.

The staff roll in the Japanese prototype is completely different from the American version. It is completely in hiragana text, and most of the names of the staff members reference famous horror icons, monsters, and characters.

The music does not change after passing the giant cactus in the prototype.

The dripping blood hazards present in the final version do not appear at all in this round. Their place in the ROM is instead taken by the shield from the powerups unused in both versions of the game.

A flashing effect was added to the background in the US version.

The moving blocks seen in the final are not present in the prototype.

Although the water in the boss rooms is set up to use a palette animation, it's not actually implemented in the prototype yet.

Floor 5's block layout was changed to give Jason, the Elephant Man, and most importantly, the player, room to drop down.

This floor's block layout no longer follows a simple pattern in the US version. Plus, the player can move down now.

Floor 9 was changed to, again, let Jason and the player have a space to fall. Note that in all of these layout changes, the pillars and curtains in the background no longer match the rest of the floors.

The level was rearranged a bit in the US version. Instead of starting at the first screen, you start one screen to the right, with a firecracker enemy exploding on top of you. The building with the Giant Dragon boss was moved directly to the left of your starting point, requiring some rather tedious backtracking if you're not paying attention.

Round 1: Entrance to the Dark World

The plant boss in the prototype is a parody of Audrey II from the film/musical Little Shop of Horrors. The room itself features a microphone and amp, the latter of which can be stood on. The US version altered the boss into a pitcher plant and removed the graphics for the sound equipment, resulting in an invisible platform where the amp once was. An extra spotlight above the boss was also removed.

The boss' design change was carried over to the title screen as well. Note that the original sprite had blood dripping from its mouth; the sprite palettes were not altered in the US version, resulting in a set of very red teeth for the Man-Eating Plant.

The three types of musical notes that the boss spits out in the prototype were replaced with bubbles in the US version.

The Pumpkin-Ghost boss fight was originally a blatant parody of the film Planet of the Apes, complete with an ape riding horseback and a very cartoony version of the famous Statue of Liberty scene in the background. Graphical differences aside, the two bosses behave identically to each other, though you can crawl underneath the Pumpkin-Ghost boss without taking damage. The background graphics were completely erased in the US version, similar to the microphone and amp in the Audrey II/Man-Eating Plant room.

The boss' projectile was changed from a bullet to a cute li'l pumpkin head.

Medusa was changed from a humanoid form to a snake-like form, possibly because Nintendo objected to the player hitting a humanoid woman with a baseball bat.

In the US version, you fight three different foods: a shrimp, an onion ring, and shish kebab. The prototype has only the shrimp implemented, though the other two foods are present on the title screen.

Mummy/Guardian of the Giant Sphinx

The mummy was changed into a transparent ghost and the background recolored blue in the US version. According to the manual, the boss is the "Guardian of the Giant Sphinx". It was probably changed to avoid any association with the 1932 film The Mummy, even though depictions of mummies themselves aren't exactly protected by copyright.

The serifs were removed from the X projectiles in the US version.

In the prototype, this boss is a Mogwai from the film Gremlins which transforms into, well, a Gremlin at the start of battle. This became the Giant Cat in the US version, although its projectiles were not changed.

The background was recolored in the US version. The number of zombies were also decreased from three to two, and they were moved out from in front of the tower.

The zombies also cannot be attacked in the prototype, and you cannot take damage from them. Attacking the zombies in the US version causes them to dissolve and reappear, resetting the amount of time needed to watch them dance.

The Mad Javelin Man's face changes at the start of the battle in the prototype. This was removed to avoid association with the similar daikaiju "Daimajin". His arms were also touched up a bit in the US version.

In the prototype, there is only one face, which moves back and forth along the ground. The US version adds three more and has them flying around randomly instead. Additionally, the shadows in the background were extended, and the boss was given some dialogue.

A huge, scary robot thing heavily resembling the Xenomorphs from the Alien movie series became the Grim Reaper in the US version. The facehuggers were also replaced with floating heads. 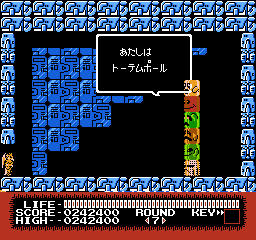 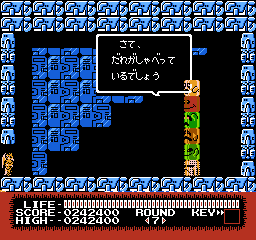 A totem pole boss was planned to be included in Round 7, but was cut for unknown reasons. The graphics, programming, room layout, and dialogue are still intact in the ROM, and can be seen by changing ROM address 0x9C6E from 91 to B3 and entering the potato bug's room. It notably speaks in a somewhat "girly" manner, most notably using "atashi".

The boss simply slides back and forth along the ground, and doesn't shoot anything. Although the sprite itself is rather tall, only the two bottom segments can actually hurt you, allowing you to safely jump over it. It's possible that the boss' programming was not finished before it was scrapped.

Three unused, differently-styled faces can be found alongside the used ones in the game's CHR. 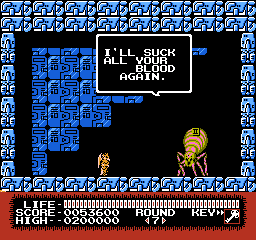 The US version adds another (rather lazy) boss to floor 13, a duplicate of the Giant Spider from Round 3, except with a "II" slapped on top. This took the place of the unused totem pole boss from the prototype.

Unfortunately, after adding the boss, the designers neglected to change the number of boss battles required to get the key from two to three. Since the code checks for exactly two bosses, you will lose the key if you fight all three! All you can do at this point is reset the game and try again.

The Giant Dragon starts off in a more interesting place in the US version, curled up in the eye socket in the background.

The boss floats in the prototype, so the only way Mark can attack him is by jumping.

While these bosses may not have underwent significant changes, they have something else to say most of the time.

Dead things tell no tales no matter what language it's in. Torigaran[1] speaks in an amusingly polite, formal manner.

Fried jumbo shrimp to go. This boss is likely a pun on the The Fly, reinterpreted as "The Fry" since the word "fly" and "fry" are pronounced the same in Japanese (フライ).

Unlike the US version, it doesn't change forms when you beat its first form.

This is a boss you can count on. This boss is a parody of Banchō Sarayashiki, a Japanese ghost story.

They're still milking the pun for all it's worth. The text "もお" is also an onomatopoeia for a cow's moo. Unfortunately, it doesn't moo when hit like in the US version.

He's much more of a nice guy in the Japanese version. Why would you want to hurt a nice celebrity? The English version changes this a bit.

In the English version he's Royce. And he rolls. Get it?

The giant caterpillar idea may be inspired by Edogawa Ranpo's The Caterpillar, a story of a veteran badly injured in war. Another possibility is that it's an homage to famous horror manga artist Hideshi Hino's Bug Boy. It's about a strange child obsessed with caterpillars who transforms into a giant one himself in a bed that looks very similar to the one seen here. The last possibility is that it's a reference to Franz Kafka's The Metamorphosis, a novelette where a travelling salesman wakes up one morning to find that he's a "terrible insect".

Let's give this guy a hand, folks!

As per proper vampiric folklore, this vampire metamorphosed into a bat-like creature for the US version.

One of the Elephant Man's eyes is visible through the mask in the US version.

The eggs in Round 2 release Alien facehuggers in the prototype. These were changed to bubbles in the US version, although the eggs were left unchanged.

To mask (heh) this guy's resemblance to Jason Voorhees from the Friday the 13th series, his hockey mask was changed to an umpire mask. He also takes 48 hits to kill in the prototype, which was changed to just 8 in the US version. This may have been a joke about Jason being nigh-invulnerable in the movies.

In the prototype, the ghosts were originally jiangshi, or Chinese hopping vampires. As Western players likely wouldn't know what these were, they were changed into a more familiar form, and their hopping behavior was replaced with a more ghostly back-and-forth floating.

The latter half of the Game Over song was recomposed to be more energetic (read: Faster notes, and more of 'em).

A cheat that was disabled in the final version is intact in the prototype: Before the Round 1 title card appears, hold Up + Down + Left + Right + A + B on Controllers 1 and 2, the easiest way being to hold Up + Left + A + B on the former and Down + Right on the latter. It greatly increases the time Mark spends in Monster Mode during his first transformation.

(All translations: Bast)
Retrieved from "https://tcrf.net/index.php?title=Proto:Monster_Party&oldid=1352877"
Categories:
Cleanup > To do
Games > Games by content > Prototypes