This is a sub-page of Proto:Mortal Kombat Trilogy (Nintendo 64).

A prototype present in the source code leak of the Nintendo 64 version of Mortal Kombat Trilogy. It is dated April 1, 1996 and was found inside an archive named ROM.GZ. Considering how broken and seemingly early it is, this build might have been just a test to see if the game compiled properly. 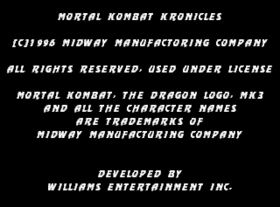 The copyright notice in this build is incomplete and features a different title for the game. 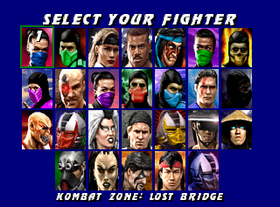 The character select screen is based on Mortal Kombat 3 and largely resembles how it looked like in early trailers. Rain and Noob Saibot's portraits are recolored versions of Sub Zero and Reptile's portraits from MK2, respectively.