This page details one or more prototype versions of Ristar (Genesis).

The most noticeable change is the name: Ristar's name is now Dexstar. While the name change isn't unexpected (Even in the July prototypes, a name change was planned, though in that case the localized name would be "Volt"), reverting the name back is more unusual. One possible explanation -- and keep in mind that this is an educated guess, don't take it as gospel -- is that "Dexstar" was already trademarked by a rim manufacturer in 1985. While a separate trademark could have been filed, since the old trademark was not in the same field of interest, Sega of America might have wanted to play it safe anyways. The name "Volt" is too generic to trademark, so they simply went back to the Japanese "Ristar". 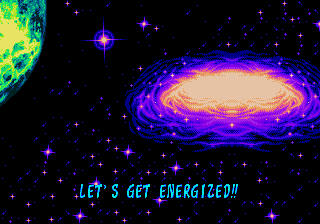 This text only appears in the August prototypes. It's on-screen after the story text but before Ristar/Dexstar flies in from the background.

The localization team gave the game logo a redesign as well! The shooting star was moved to the upper-right part and evokes the image of a neon sign. Two brown stars were stuck to the bottom, and the planetoid was removed entirely.

The added details help to fill the void that the "The Shooting Star" subtitle took up in the Japanese game, but it was ultimately reverted back.

The text (C) SEGA Enterprises , LTD 1995 is in a different position than in the final.

The infinite continue password, "AAAAAA", still works in both prototypes. This password was disabled for the final localized version.