Ristar is an action-platformer starring (*ahem*) a star creature with grabby arms who headbutts his adversaries. Apparently, just straight-out punching them wasn't an option. 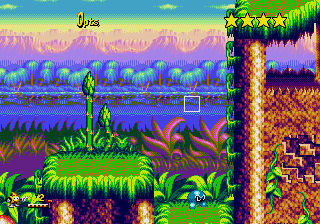 Use the Pro Action Replay (PAR) code FFE50B:78 to enable a free movement mode. Hold A, B, or C to move faster.

To exit this mode, turn the code off and press Start. 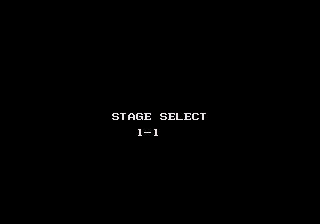 An older, text-based stage select is still in the game. Use the following Game Genie codes and press Start to access this menu.

NOTE: The font used on this stage select was removed from the international versions. The stage select still works, but no text is displayed.

Press A and C to navigate left and right respectively.

The Pro Action Replay (PAR) code FFFE05:08 will enable a slow motion feature. With this code on, gameplay will move at half-speed.

Please be aware that upon completing a stage, the game will freeze. It's likely that when this was actually used for debugging, it could be flipped on/off through a button press to prevent this kind of thing from happening.

Room 20 is unused in the final game, and would have been used somewhere in Round 6-2. It would have featured an interesting gimmick that appears nowhere in the final game: Gravity flipping! Note the reversed tiles at the top of the screen, and the upside-down gem chamber.

Those pipes, which only appear in this room, are using incorrect color values. That color space was reclaimed by the stage's red and yellow background layer after this room was scrapped.

Four placeholder screens remain in the game. They all consist of a simple descriptive message on a black background.

Like the early stage select, these use a font only found in the Japanese version.

An early version of the Golden Screw is also in the game. The only round that loads the correct palette for the early sprite is Round 6-2, but the final treasure is found in Round 6-1. 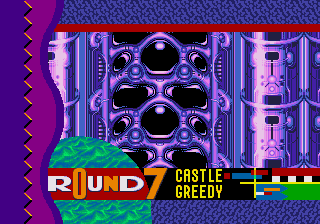 The "Next Round" screen also has graphics for Round 7, where it's called "Castle of Greedy" rather than "Castle Greedy". It's similarly unused, since there's no Star Handle or height bonus at the end of the stage.

According to a table in the Sound Theater, the "SOUND OFF" option is supposed to knock the brown bird off its perch. However, since the sound code it's looking up (C0) is the same one triggered by the B Button, this doesn't work as it should. Use the Game Genie code DMXA-LHTK(JP)/DM6A-LH1F (INT) to fix this bug.