This is a sub-page of Ristar (Genesis). 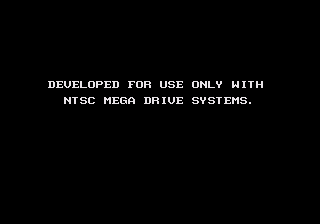 The Japanese version has a region lockout system. This was removed from the international versions, which are region free.

Story text was added to the intro sequence in the US and European versions. The Japanese version had no text at all.

This sprite of the Star Goddess, Oruto, only appears in the Japanese version's intro, and is used after the Elder's star reaches Ristar's planet. However, the Game Gear version still retains this character, regardless of the region. 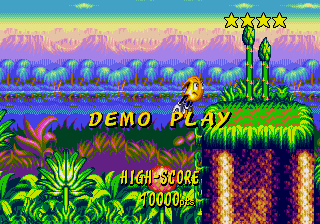 Ristar's default stance is more cheerful in the Japanese game.

His default idle animation (Used in Round 1, 7, and Bonus Areas) was also changed.

Most enemies with neutral expressions in the Japanese game are angrier in the international versions. The enemies pictured here only had their eyes altered; Some of the other enemies have more elaborate changes.

This owl is angrier, but it also has a smaller mask in the international game. The shading on its tail and wings was also changed slightly.

The shading on the bagworm Orblets is brighter in the international sprite, and the string's palette was changed from blue to brown.

The flying squirrel in Round 1-2 was replaced with some kind of bat-thing.

The fire Orblets in Round 3-2 were given darker shading and a wider shine spot for the localized game.

This horn enemy, found in Round 4-1, has a second shine on its right side and some less sophisticated shading in the Japanese game.

The dancing birds of Round 4-2 have noticeable breasts in the Japanese game. The graphics were changed to disguise this; Now it just looks like a fold in the shirt.

Additionally, the shading on the back of his tongue was changed, and the light on his stomach was shrunk.

The Japanese version has a Valdi System display in the Next Area screen. This was removed from the localized build, probably because some of the new planet names are too large to fit in the box.

The Japanese game has seven additional passwords that were taken out of the localized version. 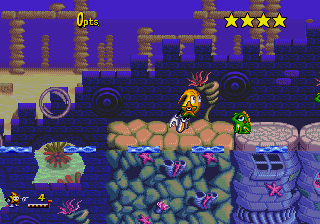 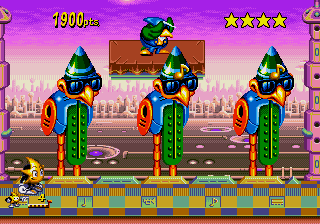 In the Japanese version, notes appear above a bird robot's head when they're about to slam down. These were removed from the international game. 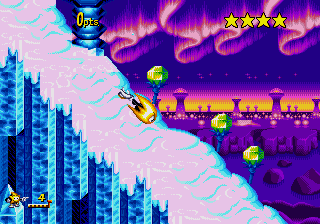 A short stage intro was added in the international build. Ristar rockets down a snowy slope before falling back... 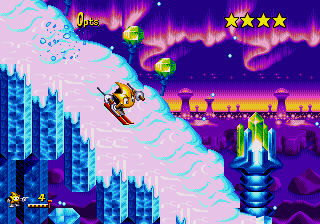 ...and reappearing with a set of skis. Ristar jumps off of the slope and the stage begins proper.
It should be noted that this intro can be skipped. 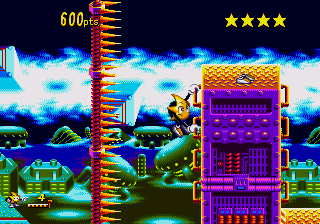 Halfway through Round 6-1, Ristar enters a swimming section with invisible water. There's no explanation given in the Japanese version, so the international game adds a sprite for a set of anti-gravity shoes. 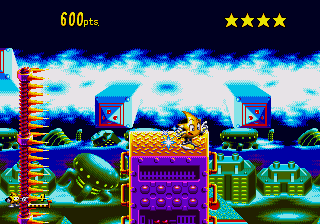 There's even a nice animation of Ristar admiring his fancy new footwear.

In the Japanese version, Greedy, Inonis, and Uranim are stranded on an unknown planet. A contemplative Greedy stares at a distant flickering image of Ristar. In the international game, Ristar finally reunites with his father, the legendary hero. This ending was changed to fit with the new text in the game's intro. Also, Ristar has four fingers again, along with his father.