This is a sub-page of Proto:Shining Force III. 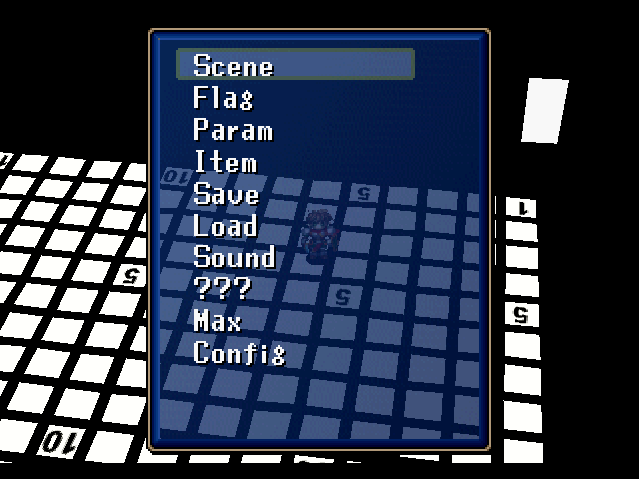 Entering 3602091E 0001 with an Action Replay will enable a debug mode, similar to the Flash! Sega Saturn vol. 23 demo. Its functions are as follows:

The sound test for the game is extremely paired down compared to the final. Jingles and voices are not present (despite voices actually being in the game), 10 slots are completely missing, and another 12(!) tracks have been deleted from this build of the game. The list is as follows (duplicate tracks are in bold, italics are songs not in the demo).

Strangely, while the final reorganized the tracks, there doesn't appear to be a noticeable order beyond the first 10 entries. Furthermore, tracks 35-44 appear to have been added in the order they were made.

While most items are present, the vast majority use generic placeholder graphics and names (i.e. the Ruin Map items all say "Map"). There are a few changes, however.

Only maps that are functional or otherwise notable are being listed here.

Buried in the dialogue is an early list of the game's locations, many of which are in an earlier state.

Some things worth noting:

Areas not yet added to the game

These 22 locations were left out of the location list, suggesting they were still in progress at the time this demo was made

Of these, one is for "Switching Point", three are for cutscenes("Over the Border", "Aspia Roof" and "Complete"), one for "Vagabond", two are for "Flagard Castle", seven(!) for the town of "Malorie", and 8 for the "Ancient Shrine".

Retrieved from "https://tcrf.net/index.php?title=Proto:Shining_Force_III/Taikenban_(Otanoshimi_3Shiro!_Disc)_Demo&oldid=1103455"
Categories:
Cleanup > To do
Subpages