From The Cutting Room Floor
< Proto:Spyro the Dragon (PlayStation)
Jump to navigation Jump to search

This is a sub-page of Proto:Spyro the Dragon (PlayStation).

The August 27th, 1998 prototype of Spyro the Dragon is a localisation prototype for the PAL release of the game, built between the final NTSC-U and PAL builds. It was released online in around 2007 but was assumed to be a standard PAL ISO, and as such was subsequently lost. This build was not re-released until March 21st, 2020.

Since the build date of the WAD is not known due to it incorrectly showing the NTSC-U final build date, it is assumed that the build date is the same as the disc modification date of August 27th 1998. Files suggest it was built August 24th 1998 at the very earliest.

Users should be aware that the only known dump of this prototype appears to be inaccurate and full of glitches, which probably don't reflect an accurate dump. In particular, it's a very... loud prototype. You have been warned.

The following is a table comparing the various modification dates of each of the files within the ISO between the August 27th prototype and the final PAL build.

Oftentimes the WAD is used as a point of reference for when the prototype was built. However, despite the fact the WAD claims to have been modified on August 12th (the same date as the NTSC-U final) it was clearly edited after this version - the WAD from this version and the WAD from the final version are not the same. 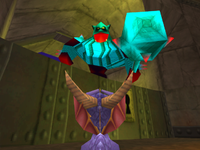 Mysteriously, Gnasty Gnorc reuses an early design seen in a small handful of magazine screenshots and in the June 15th prototype, as well as unfinished animations despite being fully complete and present in the NTSC-U final build. He still retains his normal appearance in the game's opening cutscene, so the exact cause for this is unknown. One possibility is that a developer used an older backup of Gnasty's assets when producing this build, for whatever reason. As a result, he behaves much differently: