Even though dated same, it's a later build than mario-kart. Even more things are finalized, with minor differences left.

To get the ROM working, apply this patch.

Changes between this and earlier build 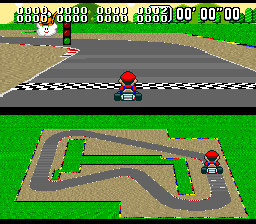 While it still uses the piano as the bassline, the instrumentation has been finalized.