All six Bonus Challenges used in the final game are present and fully functional here, though all of them have differences. 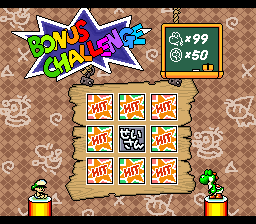 An early version of Flip Cards. Starting the game costs one Dragon Coin. 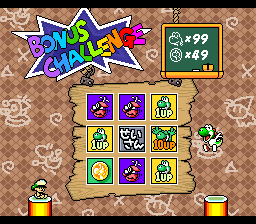 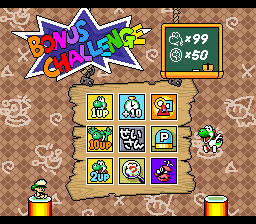 Yoshi can win extra lives, items (as long there is space for them in the item inventory), and Dragon Coins in this version of the minigame. As in the final, the center panel can be used to stop the game and keep the revealed rewards. Flying Snifits are used instead of Toadies for the cards with no rewards. 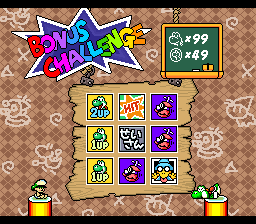 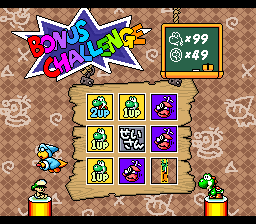 As with the final game, Kamek appears in both card form (which ends the minigame without awarding any prizes) and as himself (when his card transforms into a 10-Up after all the other cards are flipped).

An early version of Scratch and Match. Starting the game costs one Dragon Coin.

Correct and incorrect panels are marked by the early blue-capped baby and Shy Guys respectively, which were changed to Baby Mario and Toadies in the final. 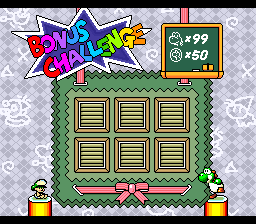 An early version of Drawing Lots. Nothing is needed to play this one.

Unlike the final version, the rewards involve adding, multiplying, or subtracting lives, not winning items.

The back side of each card has a Dragon Coin on a blue background rather than Yoshi's head on a red-and-yellow striped pattern.

This version of the minigame has much different rules: the player chooses three panels and is awarded an amount of Dragon Coins calculated from the numbers shown on said panels. 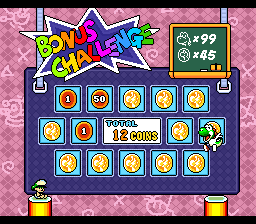 Yoshi wins the minigame by getting at least five Dragon Coins, otherwise he loses (the minimum number of Dragon Coins he can get is 3, so he may lose one or two Dragon Coins). 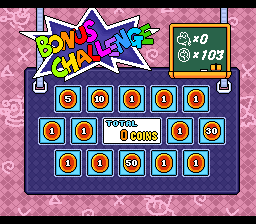 The composite image above shows all the numeric values that the covered panels can have behind, from a specific game. The only thing that differs between different games is the order of the panels, not the overall number of panels with a specific value.

The final version overhauled the minigame entirely to use mechanics similar to the card-matching minigame from Super Mario Bros. 3: 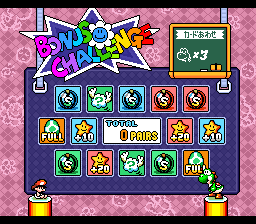 An early version of Roulette. Oddly, while the chalkboard shows the current coin balance on the second row, it uses the Dragon Coin icon. 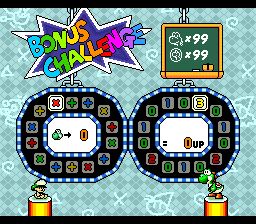 The roulette's symbols and numbers are in the same positions as the final version, but this version allows the player to lose all of their remaining lives rather than (current lives - 1). This difference also results in a major bug, as accessing this minigame with 0 lives will softlock the game.

This issue was solved in the final version by not allowing the game to be played if the player has only one life remaining.

The rewards for getting three Cherries and three 7s were swapped for the final. The latter giving the top prize is more in line with many other physical and digital slot machines, including the one in Super Mario Bros. 2 (which the Yoshi's Island one is clearly based on, given the symbols used).