This is a sub-page of Proto:The Magical Quest starring Mickey Mouse.

Several of the letters (like the E, P, T and W) were more closely styled after the font used in the Disney logo. Those characters were likely changed to make them more readable, while others received minor touch-ups. Only the B, H, J, U and ! remain untouched.

The score and extra life graphics are thicker and rounder in the prototype. Mmm-hmm.

There's less contrast in Mickey's default palette in the prototype. The final game brightened the white and light yellow colors and darkened the light gray, dark gray, and brown colors.

Mickey's default pose underwent the most touch-ups of any sprite in his default set. The shading on each part of his body -- mouth, lips, eyes, ears, hands, and trousers -- was improved in the final sprite. Mickey's left arm was made less thick, and the missing pixel on his right arm was filled in. Mickey's shoes also went through a redesign; In the prototype, there are no outlines or shading at the bottom to denote where the shoes end.

The shading on the bottom of Mickey's upper lip is one pixel wider in the final game. Not interesting, but it is a difference.

In the prototype walking animation, the shading on the bottom of Mickey's upper lip is made of two separate segments, but the shading isn't consistent between frames. The final game uses a single, unbroken line of shading.

One of the pixels in Mickey's right eye is darker in the final version. Wow!!!

Mickey's hands were redrawn in his hurt / defeated animations, and the hands were lowered and placed closer to his head in the second and third frames. His shoes were also redone to match their updated design.

There's more shading around Mickey's eyes in his head-shaking animation, and the shape of his eyes in the second frame was redrawn to match the eyes in the first frame.

Mickey's eyes look odd during his throw animation; he almost looks like a bear or a badger or something in these frames. The final game adjusts his eyes and adds another line of pixels to the left of the eyes. Unfortunately this was not a consistent change, as Mickey's ducking & throwing animation and both of Mountaineer Mickey's throwing animations still use the older eye graphics.

In the prototype, the player has an infinite amount of air, so swimming isn't a concern. In the final game, if the player spends too much time underwater, they'll start taking damage. For some reason they didn't put a visible air meter in this series until the third game, but at least they updated the swimming animations to clue the player in about swimming being potentially dangerous.

Mickey's left foot is higher than the right in the prototype, while in the final game his feet are level. This ended up introducing an error in the sprite - a transparent pixel to the right of Mickey's right shoe - but it's not that visible in the game proper. Mickey takes less time to face the player in the final game.

Besides the expression change, there are also some minor adjustments to Mickey's trousers.

Mickey's wizard costume underwent similar palette changes as his default design did, with the addition of the every red color being brightened except for the darkest red, which was darkened even more.

Wizard Mickey's idle hands (and legs) were redrawn, and shading was added above his pupils.

Wizard Mickey's underwater idle animation uses the same expression as every other costume in the prototype. In the final game, Wizard Mickey has an additional power: An air bubble that keeps him from taking drowning damage. So, Wizard Mickey is now happy while idling in the water. Mickey looks happy while swimming in the Wizard costume in both versions, so this power might have been planned from the start.

Wizard Mickey has a different victory pose in the prototype. Every other victory pose ends with Mickey facing the screen, which is likely why this was changed.

The same change can be seen in Wizard Mickey's costume change animation.

Firefighter Mickey's spriteset underwent the most changes of any costume, and most of them have one thing in common: Boots. The boots in the prototype sprites are lighter and seem to be cut off at the bottom, while in the final version, the boots are darker and have definite soles.

Some poor artist had to go through every sprite that had Mickey's feet touching the ground and redraw the boots.

Firefighter Mickey's stunned animation spends more time fully ducked in the prototype, while in the final version the last animation of the hat floating in the air lasts longer. And above all else, boots.

Standard underwater idle changes. Mickey's gulping like a fish in the final version.

Swimming is bad for you. So is that pixel above Mickey's left eye that keeps disappearing, thank goodness that was fixed.

Did you know: Rodents are not aquatic mammals.

Two of Mickey's latch-on frames were redrawn in the final game. His straight-up latching animation is particularly off-model in the prototype.

Mountaineer Mickey faces toward the camera while climbing in the prototype, while he faces away in the final game. The overall quality of the animation was greatly improved too.

Mickey now looks up while swinging upwards in the final game.

The shape of the apple is almost identical between versions, but the shading is very different.

The second fruit item in the prototype is a pair of cherries. They're a bit too similar visually to the apples, so the final game changes it to a bunch of blueberries.

The shading is inverted on the small heart in the prototype, giving it a "glassy" appearance. Whether this was intentional or the result of an earlier palette change is unknown.

The big heart is shaded slightly differently, and the divide is higher up.

The lamp, like the small heart, seems to have incorrect color assignments. Who ever heard of a blue magic lamp? This ain't no Bubble Bobble. Get out of here.

The sparkles that appear when the red blocks are respawning is slower and less impressive in the prototype. The slower animation makes the pink blocks take 12 frames longer to respawn.

The magic door's closing animation has an extra animation frame in the prototype that was removed later to free up VRAM. It's only visible for 3 frames, so it's not that big of a loss. The dark gray color is solid black in the final sprite.

The helpful wizard has angel wings in the prototype! It's not clear why they were removed: Either Nintendo or Disney had a problem with them, or Capcom was being overly cautious with regard to Nintendo's content guidelines.

There's a stray line of pixels on one of the Wizard's talking frames in the prototype.

The coin-dropping birds have a slightly different color palette in the final game; the grays of the prototype were replaced with purple and lavender. As for its sleeping animation, it's faster in the prototype, with a simpler animation for the bubble rising and popping.

The bird is fatter during its "groggy" phase in the final version. The prototype sprite is missing a tile on the right side. This is normally not visible since Mickey's hand would be covering it up... 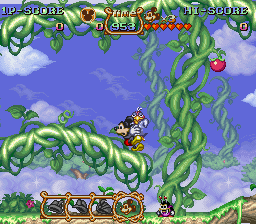 ...but turning around reveals the gap in the sprite. The final version fills in that gap.

The coin bird suddenly returns to its compact sleeping size in the prototype, and it has a happy expression again. To keep some continuity between animations, the bird maintains the size and expression it had during its panicked state in the final game.

The flying berries take off in different ways in both versions. In the prototype, a long stem extends from the center of the berry and the sepals start spinning at top speed immediately. In the final game, there is no stem and the sepals take longer to rotate at full speed. There's a more exaggerated rotating animation in the final sprite.

The conditions under which the berries burst is different too:

The cloud platforms are 16 pixels wider in the final game. The clouds are grey in the prototype, which doesn't really match up with the blue clouds seen in the stage's background.

The shape of the bee's antennae during its diving animation is slightly different in the prototype.

The prototype has a different hurt animation for the bee...look at those teeth! The body is reused from the bee's idle-to-diving transition animation. The final game reuses the sprite from the diving animation and gives the bee a less extreme expression.

The calyx of the rolling tomato is brighter and thicker in the final game, and the shine is shinier.

This enemy was changed from a fish with webbed toes and eyes in its mouth to a simpler frog design.

This enemy has one more frame in its swimming animation in the prototype; the developers were able to recycle one of its jumping frames, something which was only possible before the redesign.

Fish or frog, they both get bonked.

The starfish and fish / frog share the same palette in both versions. As a consequence of the redesign, the starfish got a duller palette.

The falling leaves are brighter in the final game, while the midrib was darkened to make it stand out more.

The leafling's emerging animation is timed differently in the prototype. It looks around more, then immediately gets up. The final game recycles one of the frames it uses for submerging to transition between the looking and walking animations.

Here's that walking animation. Look at that sweet midrib and/or midvein go.

The big fish's eyes are less sinister in the prototype.

The fish is thicker in the final game, with a larger and more prominent tongue.

The string of the cocoons/bagworms/beans or whatever in Stage 2 is the same color as the body in the prototype, while it's a darker color in the final version. The bobbing animation is a bit less smooth in the prototype.

This is the only graphic of Boioioing in the prototype; in the final game, the body and skirt are separate sprites. The prototype design has an open mouth like Bat and Cro-Magma, a shorter skirt, and a more awkward idle stance.

The clubs that the stumps in Stage 2-3 use are thicker in the final game when they're held up. The in-between and downwards swinging frames are identical in both versions.

The big rock block in Stage 3-2 has more unique tiles in the prototype: Check out the center of the blocks in both versions. The developers were able to free up four spaces in VRAM by using existing tiles and mirroring them horizontally / vertically.

The fang blocks are more intimidating and less block-shaped in the prototype. The design was likely changed to make it obvious that they can't hurt the player unless they get crushed by them.