A prototype from the first few hours of development of VVVVVV. So early it's completely made of placeholder graphics. It was distributed by the developer himself to the website Good Old Games (GOG).

The only rooms available are test rooms, none of which resemble any of the rooms in the final game: 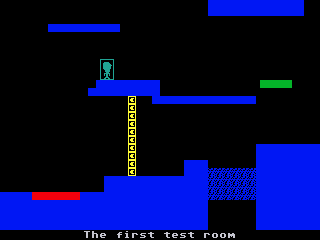 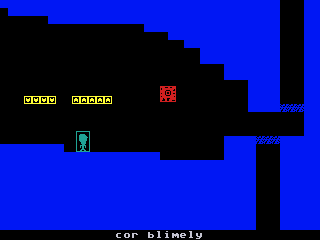 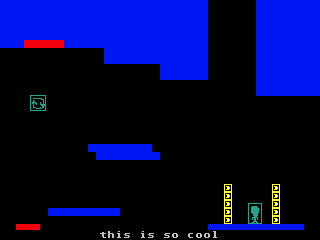 The first test room has red blocks which kill the player, disappearing platforms which behave much like in the final game, fall-through platforms and one-way tiles. The room to its right has more of the same, with the addition of a placeholder enemy.

The room below the first test room has a more interesting thing, an blue item that when touched reverses the gravity, similar to the gravity lines in the final game. Going outside these rooms will lead you to an inappropriately named void called "Oh shit" where you just fall endlessly: 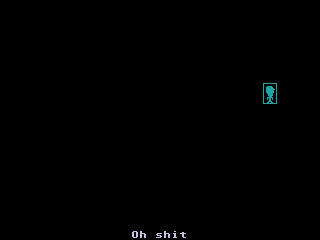 The main character's placeholder graphics look like a generic silhouette of a human with a surrounding border.

These tiles prevent the player from moving in the opposite direction they point to. They're effectively used as one-way platforms or walls. These tiles are still present in the final game, but they go unused.

These tiles are fall-through platforms, disappearing once the player lands on them, but not if they walk on it from either side. Differently from the disappearing platforms, only the tiles that the player touch will disappear. They also appear on the VVVVVVVV prototype, but they were removed from the final game.

The disappearing platforms were already implemented at this point in development! This is one of the only things that remained mostly unchanged compared to the final game.