From The Cutting Room Floor
(Redirected from Proto:Wipeout 3)
Jump to navigation Jump to search

This page details one or more prototype versions of Wipeout 3.

In earlier versions, both rockets & missile pickups used 3 rockets instead of 2.
3 Rockets were fired in a line, one next to the other, pretty much like in the previous title. Missiles could lock onto up to 3 ships, or fire 3 homing rockets at a single target.

The only weapon cut from the release. The idea presumed is that it would use the ship's jets to damage others which came into contact with it.

Uses a different animation and texture than the release one, more similar to the previous title artstyle-wise. Prototype version lacks the moving scanlines, and has a red gradient in the center. 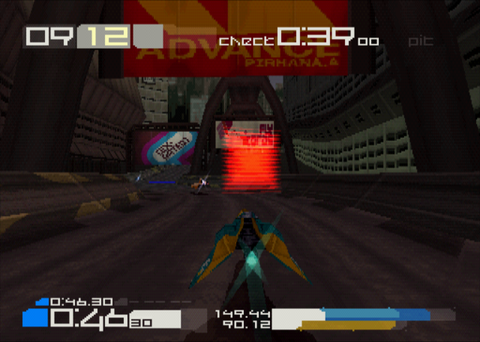 Changes between release and the prototype / demo are mostly the colors, sizes and small layout differences. While the beta had small and darker icons, release went for big and bright ones.
Some icons like: Reflector, Quake and Force Wall were completely different.

Early versions had different countdown voicelines. The Final version had a totally different tone to them, probably for better recognition.

Some pickup voicelines changed in their delivery and tone between demo and release. For release, different takes were used.

In prototype versions, the ships had different textures and colors compared to the release ones.
Every ship had a much lighter underbody section, and more details, making them fitting for a 2097 atmosphere. Some ships like: Assegai, Qirex, Goteki 45, and Icaras, had a completely different color-scheme.

Despite using the same elements and design as in release, the demo HUD is noteable for these differences:

Earlier versions had different soundtrack mixes.
The only one we have, and that is completely different from the release, is "Control" by "MKL".