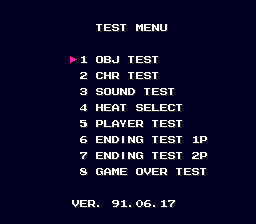 Both the JP and US ROMs have the same date (91.06.17). Both versions have identical menu screens (the screenshot on the left is from MegaTrax).

Code to jump into the Test Menu begins at $1D08 in the Japanese ROM, but it appears to never get called, nor is there anything in the code hinting at a possible use? (TODO). 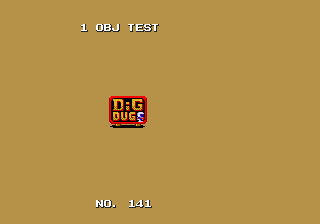 Sprite viewer. Use the D-Pad to select, press B to exit to the Test Menu. 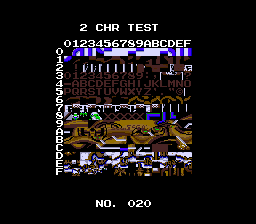 Shows the contents of ROM, some chunk at a time, as tiles. Use the D-Pad to select, press B to exit the Test Menu. 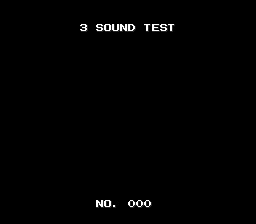 Use the D-Pad to select a sound code, C to play, A to stop, and B to exit to the Test Menu. 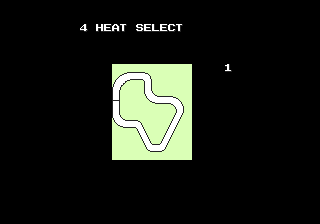 Apparently selects a track to play? not sure... D-Pad selects, C races, and B exits to the Test Menu. 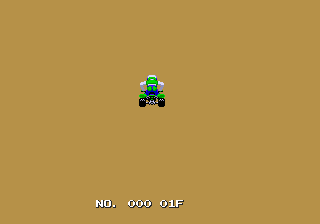 Another sprite test, but with player sprites. Left and Right select a sprite, Up and Down scales the sprites, and B (you guessed it) returns to the Test Menu. 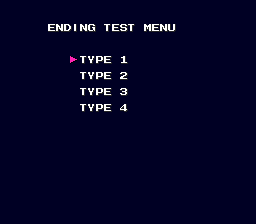 Shows one of four endings for 1P mode. The text appears to be hardcoded for the Easy mode regardless of which you choose; only the colors change. B on the select menu returns to the title screen, and there seems to be no way to quit the ending itself. 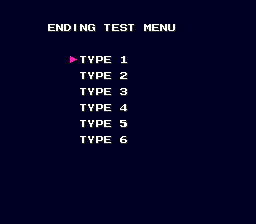 Shows one of six endings for 2P mode. B on the select menu returns to the title screen, and Start during an ending resets the game.

Shows the Game Over sequence, then goes back to the title screen.

The title screen was changed for the game's new name, with the US design straying from the original game as a result. The Japanese version uses a reddish-brown palette, while the US version uses more of a yellowish-brown.

The girls on the main menu were given a wardrobe change.

And the same for the girl on the ending screen.