The game has quite the ingenious method of detecting piracy: It registers a fake DLC ID with SteamAPI. If a Steam emulator unlocks all DLC, the game won't progress past the first chapter and will open browser windows to the Steam page of the game every frame, hopefully freezing your computer for having too many tabs on your browser.

pack/database/stat.rbrb also contains this text about a popular Steam emulator. It's referenced in the exe so it's not completely unused, but if it actually triggers anything is unknown.

As of 2.00 the game also checks the integrity of steam_api.dll and will softlock after defeating a boss in Chapter 2 by disabling your controls.

There's two debugging tilesets in the game's files. These can be shown if -debugshowevents is added to the launch parameters. 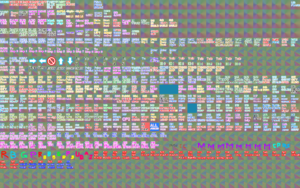 This area is not accessible in-game without replacing another map with it, since the engine only loads maps up to 9 (0-indexed). Judging by the large number of boss rooms in this map, it's probably used to test the bosses.

Oddly there's two items but their ID is far above the registered item IDs so they do nothing.

It seems that there's another option below 'DISPLAY' in the options menu named 'DEBUG MODE'. Unfortunately it can't be activated right now.

The following strings are pulled from the exe.

Optipng.exe and scalex.exe are left in the game's archive along with two batch files. Unfortunately, the batch files are corrupted (or the decryption doesn't work on text files).

The uncompressed version of Mischievous Masquerade is left in a folder named RAW (inside the DLC archive) with a filename of MISCHIEVOUS_MASQUERADE_FINAL_VER._00000000.WAV.

It has been confirmed by the developer that the areas were cancelled since a sequel is in development.

In every zone, there are empty rooms with rainbow blocks, but they're out of place and normally inaccessible. They haven't been touched since the game's release, so they'll probably continue to be unused.

Some of the rooms play the library ambient theme.

The rainbow room in the laboratory has been near completely overwritten.

Most of the town houses aren't enterable, but they all have (unfinished?) rooms with exit warps. Since there's no warps leading to them the correct background isn't loaded however.

Unfortunately there's no backgrounds for them in the game's files, but there is an inverted and vertically flipped version of Erina/Rumi's house.

The UPRPRC hideout has a section of unused rooms with somewhat difficult platforming requiring the walljump and airdash that ends in an empty room. Its 'entrance' would be above the room next to Irisu's.
Even the rainbow room connected to this area isn't accessible, suggesting that rainbow rooms may have been scrapped very early in development.

There are some unused rooms with the incorrect tileset below the castle.

To the left of the TBA room hidden near the entrance, there's a teleporter that leads nowhere and a few rooms. Underneath the teleporter is some unused rooms from the Hall of Memory.

There's some rooms underneath the entrance, but they're unfinished and aren't very interesting. They don't line up with the used rooms above them.

If it were somehow possible to jump infinitely up through the corridor all the way on the right of the map, you could continue up into a room with the letters "YUE", short for GemaYue.

Sadly you can't, so this room is only visible with Cheat Engine or the map editor. Interestingly there are triggers to show layer 2 (which the developer's name is on), so it seems like this Easter egg was actually planned to be viewable in-game at one point without cheats. But it also uses the wrong tileset, so who knows.

There are boss spawns for Cocoa and Rumi in unused rooms outside the playable map.

There's a large amount of unused maps in warp destination above and below where you actually explore. Some of the maps connect, but others don't. A lot of them use different tilesets per room.

Far, far outside the map, there is a health potion in the top left corner of Southern Woodland and some junk blocks.

Although some of these are in the Steam launch menu, the majority of them are only found in Steam forums or by decompiling the exe.

Improvements have been made to user-made levels.

Added three command line flags: -afd, -bettercontrol, and -sayablessing. These are joke options since the update was released on April Fools.