A game based on the third movie with really great music from the Commodore 64 version.

Likely intended to appear in the first part (out of 3) of the third level (and fourth obviously), this sign was almost certainly excised in order to meet Nintendo's acceptable content guidelines (no drug or alcohol references).

The starting logo graphics has one little litter "A" most probably intended to be used as an article at the "A PROBE PRODUCTION" screen in the background. In the final version the regular font "A" letter is used as sprite. 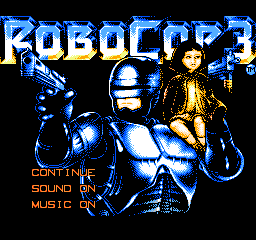 At the title screen there a set of overlay sprites are used to increase the picture color depth, as well as display the title menu. The six sprites in this set is unused and intended to draw the lower part of the RoboCop's belly. Even thought the Sprite palette of this part is not quite well fit with the background palette for the rest of the body, this is not a reason they removed it. The menu option "MUSIC ON/OFF" already (no matter whether the "ON" or "OFF" line is displayed) has 8 sprites in one line. So the half of belly overlay in the same line disappear every time the menu item is displayed and blink the same time as this menu option.

The reason they moved this part of background to the sprites, even if there are no problems with color depth in this area, because they ran out of free space for the background tiles, the lower part of RoboCop's body fills all 256 tiles, there is no more space for 12 more tiles.

The Repair lab screen has the overlay sprites as well. They generated by the program from the special bitmap plane of 32x21 tiles, and the game can't track how many sprites it will write to the sprite buffer. At some point the program overwrites two last overlay sprites with the repair tank sprites at the end of the buffer, causing to some spites under the right foot of the Robocop to disappear. Here we can see complete picture without missing sprites.

Also, repair lab has more unused tiles. The set of tilemaps to draw the different stages of damage for legs has dimensions 8x6, but only 8x5 is displayed on the screen. Last line although mostly the same as the initial background picture, except just one tile in the middle part of the right ankle, so you barely can see the difference. Main problem is that last line erase some original background tiles, you can see on the picture below, how the vertical line under the right leg is disappear when using the full 8x6 set. The code for display it still sitting in the ROM, obviously disabled.

The damage graphics for the arms has two separate rects. One for right and one for left forearms. The code has the completely unused third set of images 4x4 in size for left palm. The same a for legs, last line of tiles will overwrite some portions of original tilemap, but even if use just 4x3 pictures, you may see on the pictures below, the palm damage graphics looks weird and doesn't fit to other parts, which is not changes. So most probably they decided to not use this tiles at all on an early stage. 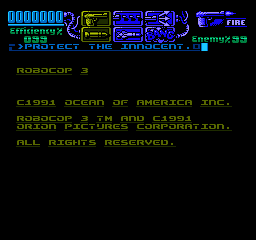 Each level is stored in its own separate bank. All room tilemaps stored continuously for each level as raw tilemaps 32x21 + 48 bytes of attributes data. The last room for each level is a black empty tilemap with no attributes or something else. It's just to fill the part of the nametable, when you reach the end of the level, which obviously never can be seen.

Developers stored some more copyrights data in such empty hidden room for the first Level. It can't be seen unless you hack the scroll limit for the right far part of the bonus room in this level and use the same CHR data bank as for HUD, which were used for writing this message during development stage. 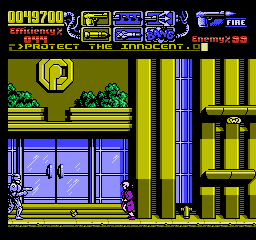 Not really hidden, just unused. Both Levels 3 and 4 has exactly the same layout, although they has different enemies, objects and opposite movement direction. And most important, that there are TWO identical sets of room tilemap data stored in two different banks, used by each level independently. The only difference, that Room 0, present in both levels can be seen only in Level 4, and just skipped for Level 3 and never displayed there. 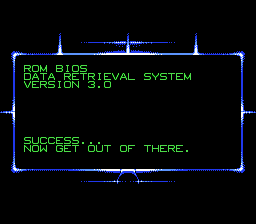 Judging from the overall game logic, this message intended to be seen after the level 5 password is entered as the final briefing before the game over. But, the game engine does not support briefings after the levels, only before them. So, it appears to be they planned to trick the game engine to think the new level is begins and try to jump to the game over somehow after all. But seems this idea were scrapped on the early development stage, and there is only one evidence of it left: level number increases after the last level to value 5, which is used then by the ending branch logic.

There is an unused string at the end of the HUD messages list: "OUT OF TIME". The message should to have index $1A, but corresponding pointer table has the maximum index $19. Most interesting, that the game attempts to use this message by requesting to display a HUD message with index $1A at the end of the game, when timer in level 5 is running out, but the game ends immediately at this point with the Game Over screen and the HUD message couldn't be displayed at all or else it should cause the error.

Also, a HUD tilemap at 0x1FA15 has another unused message, used a placeholder: "A SAMPLE MESSAGE.".

There are three different default hi-score tables in this game.

As you can see, unused one has a lot more realistic scores, replaced with less challenging numbers in the final release, and positions 4 and 6 are swapped. The placeholder has no scores, and only two first lines filled, the rest is filled with "J.BLOGGS" (short for "Joe Bloggs", a common placeholder name).