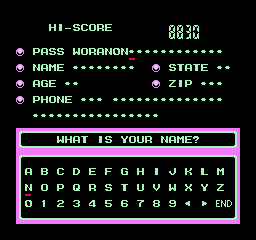 The US version of the game contains an unused and unfinished screen that asks for your name, age, and a few other details. The programming is very buggy and incomplete, as it asks for your name twice, and much of the information does not appear in the proper location on the screen. Curiously, after the information is entered, the game emits a lengthy series of tones that seem to correspond to said information, and then proceeds to the Game Over screen. It seems likely that the screen is a remnant of some kind of competition mode (a la Treasure Master), and you would need to dial a special phone number and hold the receiver up to the TV speaker to transmit the information to a computer on the other end of the line.

The Game Genie code IVOXPASE will make this screen appear at the end of a regular pinball mode game.