Treasure Master was part of a contest run by MTV, in which players were given a password that set off a 24-hour race through the entire game - including an extra world - in order to try and win cash prizes, sports/concert fantasy event packages, or SNES consoles.

Several Software Creations games (Sky Shark, Target Renegade, Fast Break, Pictionary, Terminator 2) had their empty space padded with copyright/credits text, rather than 00 or FF, as most other games did.

Note that there are no actual line feed symbols in the text; each line is a fixed length, padded with spaces.

Since there were real-life prizes associated with this game, including a rather large cash one, the programmers added some code to check for cheat devices (such as the Game Genie) at startup. These devices run their own code before handing control over to the attached game, and thus end up leaving telltale signs in the system's RAM and VRAM. If the game detects any of this leftover data, it locks up with a gray screen.

Additionally, the game checks for the serial number buffer consistency with a simple checksum as well as controls the PROM's data consistency, performing the random PROM bank checksum test (each bank contains the checksum word at $BFF8-$BFF9 for the area $8000-$BFF7, which is compared with the calculated checksum) while switching the areas. If the PROM bank checksum is wrong, the game won't show you the "Congratulations" or "Warp" screens; it will immediately switch to the next stage instead. The only critical effect of this protection is that you can't play the prize level properly because it won't initialize the rollercoaster variables, and so they will fly from and to random or incorrect locations, and you just can't advance to the next screen.

It was probably planned to be more destructive during development and protect from any device that can modify the PROM values or from hacking, but the end result is too weak: The PROM bank select is random-based, meaning that it can test any bank at the moment of level completion, and if the tested bank is fine and unmodified the game will act normally (showing the "Warp" screen and correctly initializing the rollercoaster data). 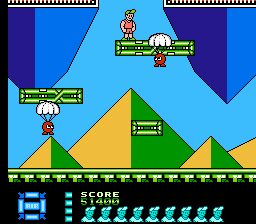 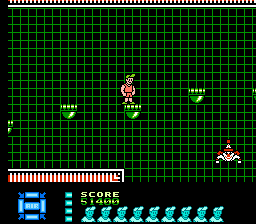 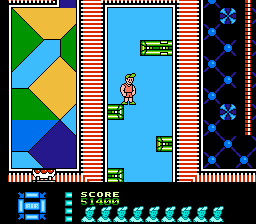 The second prize level was actually made but never released to the public. To access it you need another secret password which contains the 64-bit initial vector for the xor table generator, producing the 128-byte pseudo-random sequence to decrypt the main level handler routine.

The pseudo-random sequence is another protection feature, which performs some permutations to the initial vector each time you leave a particular area. The order you access areas makes sense: If you cheat and skip some levels, or jump straight to the end or play levels in a different order, the final permutation will be different, and the game will not be able to decrypt the secret level handler and play it.

Since the initial vector for the second prize level is not known, you can access the level only with hacking around the level index variable in RAM ($F3). Change it to any value between $14-$18 (value $19 also belongs to the second prize level, but switching to it causes the game to crash) while playing the first prize level to see at least some stages and enemies. To apply the changes, enter and leave the item screen. To refresh enemies, leave the current area. There is no proper item handling nor proper level transitions, so you can't actually play and finish it without additional hacking.

More recently, the executable code for the second prize world was reverse-engineered, allowing a functioning version of it to be played. A playthrough video was created, with the video description containing additional information about how to play the level yourself. The level is loaded from a savestate, but works for an unmodified ROM. This is not to say that the level can be played after entering a correct passcode at the beginning of the game, though, as that goal is still out of reach for now.