Rudra no Hihou (often translated as "Treasure of the Rudra") is a semi-obscure Square RPG released late in the life of the SNES. A rather unique RPG featuring three intertwining storylines, and the ability to literally craft custom spells from nearly any word you can think of. 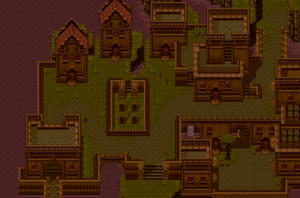 For the first few in-game days, the world's air is polluted, and to display this effect, the few areas it's possible to explore during this time use a reddish-orange palette. If one is to use a walk-through-walls code to explore the areas that cannot be reached during this state of the world, normally, you'd find that the areas don't bother to load a different "polluted" palette, instead loading the normal ones seen after the air is purified... The desert village of Avdol is an exception, however. It's never possible to visit this town while the air is polluted, yet it still loads the "polluted" tileset/palette if you cheat your way here. It's clearly not meant to happen, either, as at least one NPC mentions the purification of the air... which has obviously not happened at that point in the game. 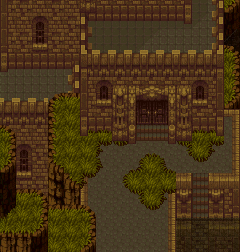 The exterior of Avdol's Lago Stone Laboratory likewise loads the polluted palette early on. However, if you exit to the roof, the "purified air" palette will be used instead, further proving that there's no way to reach the town in this state normally.

A pair of gauntlets and a necklace. Several pieces of random equipment are on display in Cryunne Castle and the Museum of Magic, but these two objects are not among them, nor are they seen anywhere else in the game.

The Diving Parts, found in the Desert Ruins by Surlent's team, are not unused. The bottom few pixels are, however, obscured by one of Surlent's allies.

You'll occasionally see armored doors behind shop counters, but it's never possible to reach or open one. Nevertheless, matching tiles for opened versions of these doors do exist. 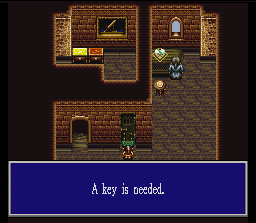 Upstairs in the small church near Danelf is a locked room, perpetually blocked off by a little girl. There's never any way to get inside it, nor is there any way to ever examine the door itself. Nevertheless, doing so via cheats does reveal that it gives the standard "A key is needed" message. The shelves in the room are empty, as well. Why this is here is anybody's guess. 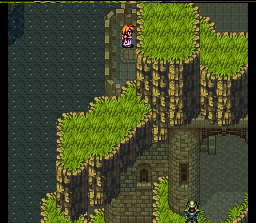 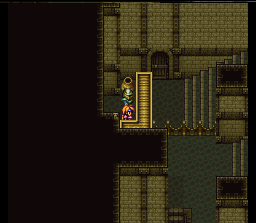 In the upper left area of the Sacred Gate exists a door on an inaccessible ledge. If cheats are used to reach it, you'll find, however, that it actually has valid entrance data... But it just leads behind one of the shop counters. The soldier/merchant can't even be spoken to.

The proper build is in the ROM at 0x1FFE0:

However, a leftover string from an early build of the game can also be seen in the ROM at 0x31D: