The self-proclaimed mother of all games, Scorched Earth consumed many people's time with its addictive strategy gameplay.

All versions of the game starting from 1.1 contain strings for weapons and accessories that are not obtainable during normal gameplay.

Version 1.1 is the only known version in which the unused items can be re-enabled. Simply replace everything between 0x3BEF4-0x3BF27 with 00 in the executable to make them available for purchase. The items are largely unfinished, and have the following effects:

Jump Jets: Non-functional. Clicking on the icon in the inventory plays a low beep sound, but otherwise nothing happens.

Teleporter: Non-functional. Clicking on the icon in the inventory "uses" the item and closes the window, but otherwise nothing happens, and the player's turn continues. 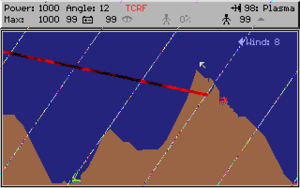 The Lasers in all their broken glory.

Laser: Shoots a multi-colored laser which wraps around the edges of the screen, often permanently corrupting the status bar in the process, and remains on-screen until other objects or explosions "overwrite" it. The beam is solid and can be hit with weapons, which sometimes causes dirt particles to fall out. The beam itself does not directly cause damage to other tanks; however, hitting a part of the beam that is the same color as another tank with a weapon may damage or destroy that tank. The Laser was officially made available in version 1.5, though its behavior was heavily altered.

Plasma Laser: Behaves similarly to the Laser, except the beam is thicker, colored black and red, does not wrap around screen edges, and cannot be hit with weapons. The palette rotates every time the weapon is fired, similar to explosions.

Popcorn Bomb: Seems to behave identically to the Funky Bomb.

As I mentioned in another post on this site, there were quite a few weirdnesses implemented which never made it into a final release. One of these was a new defensive system based on Patriot Missles. You could buy PMs, and decide at what range they would fire. Whenever a weapon entered the sphere of detection, the missile would take off and try to intercept the weapon. When it got close enough, it would explode and likely take out the weapon, or at least deflect its course. It sounded nifty, but somehow wasn't ever quite as much fun as it should have been.

The string "AdLib" can be found amongst the options menu text at 0x2E439 (in 1.0) or 0x3FC1B (in 1.1), suggesting that AdLib support was considered. Additionally, the string "SOUND-DRIVER-AD-LIB" can be found at 0x138FB (in 1.0b), 0x3122A (in 1.0), or 0x42986 (in 1.1). Nothing appears to reference either of these within the executable. The only available sound options in all versions of the game are "ON" or "OFF", which apply solely to PC speaker sounds. Later versions removed these strings.

Additional languages appear to have been planned, but these strings from 1.1 are all that remain from that idea. They can be seen at 0x3FCFB. Judging by the fact that they're near the menu text, they were most likely meant to be part of a language selection option. The only official foreign language version of the game that is known to exist is a Spanish version of 1.2.

Additional bits of help-related debugging text can be found directly below the above message in versions 1.0 and 1.1. These were removed in version 1.2.

Entering mayhem as a command-line argument will give all players 99 of every weapon and item, excluding Fuel Tanks and the unused items listed above.

Version 1.0b used the author's nickname, Sprig, and had a less organized menu. Version 1.0 would neatly relegate those options to the side, but Version 1.1 would make those buttons. "Weather" was merged with the "Landscape" menu in 1.2. A copyright was added in Version 1.0 and would be put outside the title screen picture in 1.5. The status of the version (shareware or registered) was also included on the title screen.