Shadow of the Colossus

In Shadow of the Colossus, a young man makes a deal with a mysterious entity who has him murder 16 Colossi, at 10FPS, to return a girl from the dead.

Apply the below code to re-enable some lingering debug menu code that is still present in the game.

With the code on, while in-game, press the following on Controller 1 to enable debug menus:

On Controller 2, you can also press R2 + X to spawn Agro anywhere. Agro will then drop down from the sky at your position.

While using any of these menus, use Circle to confirm an option, and X to exit.

This menu allows you to listen to music, ambient sounds, and speech samples. 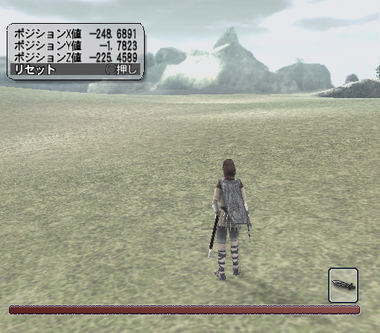 Sadly, this menu no longer works. It would allow you to change the player's coordinates. 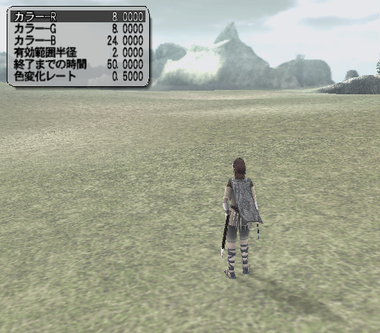 Sadly, this menu no longer works. It would likely edit lighting somewhere.

The world map is divided up into 100 quadrants, categorized into a 10×10 letter-number grid. However, not every quadrant is legitimately accessible to Wander in the final game, and some of these inaccessible areas are covered up by clouds on the map display. A few of the unused quadrants still contain early collision data, textures, and models that were never completed. 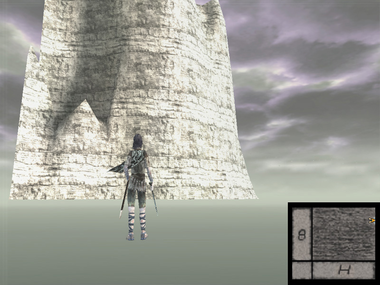 Almost all of this square is solid, meaning most of it can be walked on, but Wander will freeze if he ventures too far south.

The elevation is much lower than the ground level (-121 meters) of the used quadrants, sitting at the surface of the ocean. In the northeast corner of the quadrant, a large blue triangle and a floating mountain can still be seen.

This area has unique terrain and textures, and is the border of the cut arena Crater which would have housed the cut colossus Phoenix. While Crater, which was in the neighbouring I4, was nulled out, J4 remains. 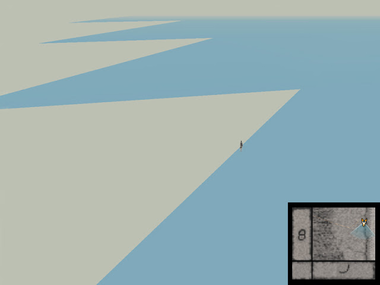 Another blue square this time with 16 odd blue triangles at its far east side. These blue squares have no collision detection (unlike D8 and H8) and all cause Wander to freeze if he ventures too close, though the camera can still be moved. 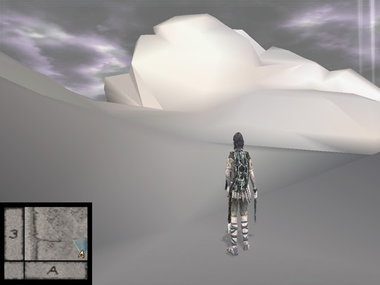 Untextured terrain at A3. Its assigned texture is missing.

This once connected to Yamori_A's arena at B3. 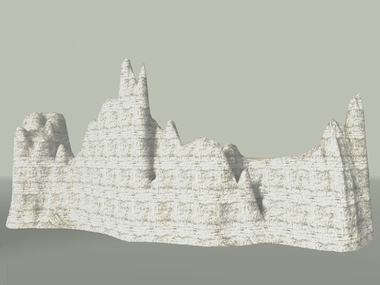 These mountains are found at I8. They once connected to the unused Buddha colossus' arena at I7. 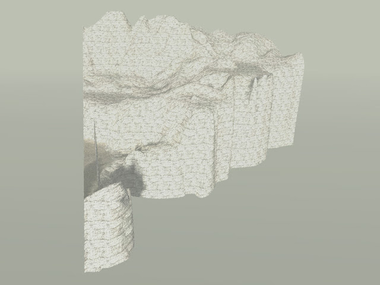 Unfinished mountains. These also made up Buddha's arena, Labyrinth, at I7. 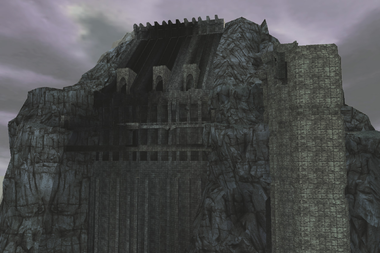 Situated at I2 on the world map is the most notable piece of unused architecture in the game: the dam. It lacks collision data.

Interestingly, it resembles the Gondola area from Ico, the game's prequel. 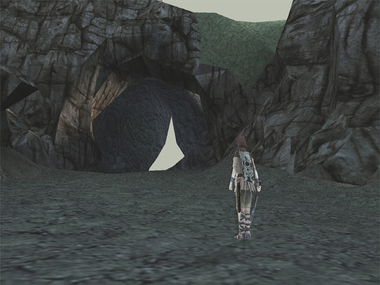 Nearby the dam floats a rocky mountain with a hole that resembles a cave entrance. This was the path to I3, which was at the time Basaran's arena. 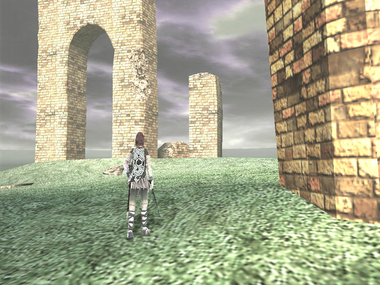 Just north of the dam is a small strip of grass that ends with some unique orange brick structures perched on a cliff. The grass strip ends at the boundary of I2 but would have continued west into H2 if it had been finished. Originally, this area was reached through H1, the original arena location for Argus. The cloudless world map in the Preview version of the game even appears to depict a path leading from the back of 15's lair to this area.

Leftovers from Ico exist within the game.

Two unused items can still be found within the game's code. 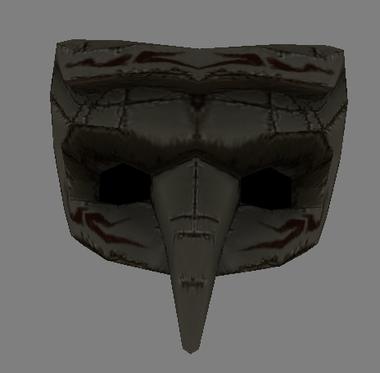 Mask of the Titans


A fourth mask item that would have been used to enhance the damage Wander dealt to Colossi. Unused text related to this item is also present. 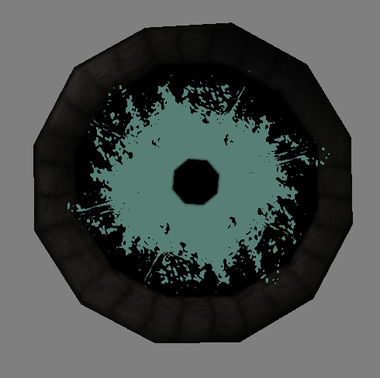 Eye of the Colossus

An item that, while semi-functional in the Preview version, was removed from the final game. It allows players to witness battles through the eyes of the Colossus they are fighting.

It is, however, buggy and unfinished. Two pieces of unused text describing the item also remain within the game:

This item is activated by pressing R3. It works well for some of the Colossi (such as 1, 4, 5, 6, 13, and 15), but for others it is clearly unfinished as when the Colossi move the camera can clip into their bodies. You have to be near the Colossus to activate it. If it moves too far away, you will hear a low beeping sound when you use it, indicating the Colossus is out of range. It has no function at all with Colossus #3, though it's not clear why.

You can even use it before the colossus is activated (again if you can get close enough). You see a single stationary frame of what the colossus sees and then watch it come to life from its point of view. There is no camera control while using the item but you can zoom in and out with R2.

An unused music track exists within the game. It seems to be an alternate theme for Violent Encounter but unlike the rest of the game's music, it is not orchestrated.

The text relating to the colossi are hints from Dormin to assist the player in defeating the colossus.

Dormin hinting how to climb the colossus.

Dormin hinting how to find the vitals on the colossus.

Dormin hinting to grab onto the colossus' tail when it raises it up out of the water.

Dormin hinting on how to stop the electricity radiating from the colossus' horns by stabbing the vital point at the base of it.

Dormin hinting to coax the colossus into climbing up the walls of the arena.

Dormin hinting to shoot the colossus in its eyes.

Dormin hinting to climb the pillars in the arena.

Dormin hinting to progress forward, as the tower the player is on cannot be toppled by the colossus.

Dormin hinting to climb up, presumably when the player reaches the under area of the colossus.

This line appears nowhere in the final game. While the tone of the Japanese line indicates that it is spoken by one of the soldiers, none of Emon's men have any voice acting other than an occasional "Ho!", presumably translating to "Yes!", in response to his commands. The only exception is one soldier saying "Lord Emon!", as seen further down in this article. However, in the ending cutscene of an unfinished preview version, a demo of the game released in an incomplete form, one of the soldiers speaks when Emon and his men arrive at the Shrine of Worship. This voice clip does not appear in the final game, and the line has no subtitles, even in the Preview version. It's possible that the voice clip corresponds to this unused line. Perhaps the soldier did not detect anything unusual upon first arriving at the shrine and thus reported "All is normal."

Emon originally exclaimed this in despair upon entering the temple.

This line was originally supposed to precede a line that does appear in the game, when Emon instructs his solders to behold Wander: "Look… He’s possessed by the dead."

The map files associated with each Colossus arena indicate the developers' nicknames for these areas.

The giant dead tree that can be seen above the south entrance of Colossus #10's cave (B2) is devoid of leaves. However, its low-poly version seen in the opening cutscene has leaves on it.

In the demo versions of the game, it is possible, via hacking, to reach the tree, which again appears as a leafy low-poly model. This suggests that the tree may not have originally been quite so dead.

In the Preview version, there is some extra land behind the cliffs to the west of the tree that feature what look like vines leading up to it.

In the E3 demo, this tree (both low-poly and high-poly) possesses leaves.