Shatterhand is what you get when you combine The Six Million Dollar Man with an '80s action movie cop. Who needs guns when your fists can topple skyscrapers? 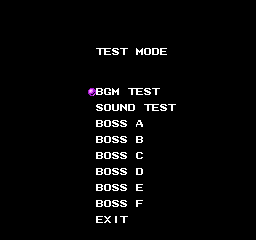 Shatterhand has a test mode available that the developers didn't dummy out before release. To access it, at the "Press Start" screen, press A, A, A, A, B, B, B, B, A, B, A, B, A, B, A, B. This will enable several minor testing features. Press Select to switch between which option you would like to use, and press Start to choose.

The other options in the menu allow you to fight against the intro boss and the other five bosses on the stage select. Once you defeat them, you will be taken back to the menu screen to fight another or tinker with the rest of the test mode.

The strings BANK TEST and CHR TEST can be found in the US ROM at 0x09EEA and 0x09F11, respectively. These are both set to appear at the same screen location as the BGM TEST and SOUND TEST strings on those tests' respective screens, which means they likely belonged to test screens that were removed from the final game. Only the BANK TEST string still exists in the Japanese version.

Oddly enough, increasing or decreasing the value in the aforementioned BGM and sound tests will also cause the second half of the background pattern table to change, which can only be seen in an emulator with a pattern table viewer. It's possible that this is a leftover remnant of either the bank or CHR test, which would have allowed the developers to view the game's CHR banks. 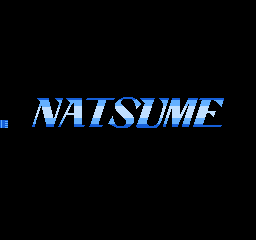 Both the US and Japanese versions contain an unused, unfinished routine to display a Natsume logo at startup, though only the US version contains the actual logo graphics (identical to the logo from Chaos World, also released in 1991). The presence of this logo implies that Natsume had originally planned to publish the game themselves before Jaleco eventually stepped in. It can be reenabled in the US version with the following patch:

Several bits of placeholder text can be found in the US ROM, which were likely displayed before their respective screens/sequences were completed.

The game contains two copies of the strings CONTINUE and END. The first set, located at 0x9A2E in the US ROM, is not actually used by the game, and is set to appear at a different screen location than the final text.

The Japanese version contains some ASCII credit text with staff names (and possibly an early title) at 0x1FC79.

The Famicom version was published in 1991 by a company called Angel, a now-defunct subsidiary of Bandai which specialized in the publication of licensed titles, as a licensed game based on the live-action superhero series Super Rescue Solbrain (特救指令ソルブレイン, Tokkyū Shirei Soruburein). The differences are mainly cosmetic (changing graphics and plot) but there were also several substantial changes, such as which boss appeared in which area. The Famicom version follows the same storyline as the Solbrain TV series and features a different opening sequence from the one in Shatterhand. The graphics for most of the characters and items were changed as well.

Despite the earlier release date, the presence of some leftover Shatterhand assets in Solbrain indicates that the former was developed first.

Area C in Solbrain was changed from a submarine into a carnival themed level. The carnival level is much easier difficulty-wise than the replaced submarine level and features different music.

The boss of Area B in Shatterhand became the boss of Area C in Solbrain, and received both graphical and AI changes. The two girls will now jump off the screen and try to land on the player, and no longer transform into a worm-like second form.

While most of the soundtrack in both games was kept the same, two songs were changed from Solbrain to Shatterhand: the Opening theme and the Area C theme.