Skate or Die 2: The Search for Double Trouble 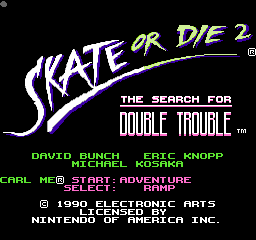 There is a cheat for displaying a secret message on the title screen. It should be enabled by holding Left + Down + Start on controller 2 before reset. But, it's not working due to either the programming failing or just after some controls read procedure changes, which currently needs at least two reads before actual data will be written to the corresponding variables. On boot, while the title screen is drawing, only one reading is performed, so the cheat never triggers.

The Game Genie code AEKPXYYE will show this message ("CARL ME®") on the title screen without pressing any buttons.

Carl Mey is listed in the credits under "additional programming".

Start up Adventure mode, and once inside, press Start, A, Select, B on the second controller, followed by one of these buttons to warp to that level: