Sky Soldiers is pretty much Time Soldiers reimagined as a shoot 'em up.

The "Manufacturer" dip switch can enable some debug features if the game is able to write to address 0x00074 in the main CPU. This isn't possible to do in the retail game, since that space is used by the exception vector table, but was probably possible in development versions. Place this cheat in MAME's skysoldr.xml cheat file to bypass that check: 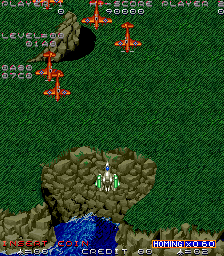 Set the game manufacturer to "Romstar". The score header palette will gain a pink tint, and four variables will be printed to the top-left part of the screen.

These graphics are from what appears to be an earlier weapon select menu.

No palette quite matches up perfectly with this older tileset, but palette 2D is the closest match. Note the odd yellow color in the first block's cycling palette; This should actually be a darker shade of blue.

This menu has space for two weapons that didn't make it into the final game, "Shild" and "Cyclon".

There are also HUD graphics for those weapons that match the final HUD design.

Flags for all six countries seen in Sky Soldiers, but the final game uses three-letter abbreviations to represent those countries. The palette for those flags no longer exists, but since they're real flags and all, it shouldn't be that hard to guess what the actual colors are, should it?