Sonic Blast Man is a first-person action game wherein the titular hero must take down five different opponents by punching them but good. To achieve this, the player has to physically punch an actual, real-life punch pad with boxing gloves.

As with anything that encourages punching something as hard as possible, it ended with fractured arms and wrists.

Put the following code in MAME's sbm.xml cheat file to change the standard test mode into one of five normally-inaccessible debugging tools: 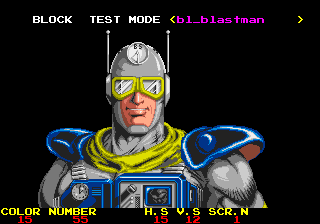 This is a FG/BG "block" viewer. Since the foreground, background, and sprites all use the same graphics bank, this is also a sprite viewer. 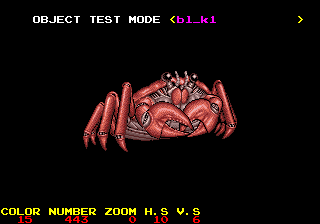 Since, as previously explained, FG/BG and sprites use the same graphics bank, the only difference between the Block and Object tests is the zoom function and the number of palettes available. 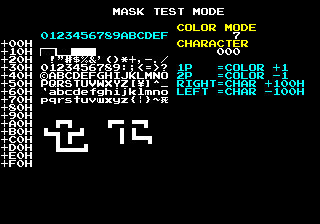 Displays the raw contents of the game's graphics in 8×8 tile form. 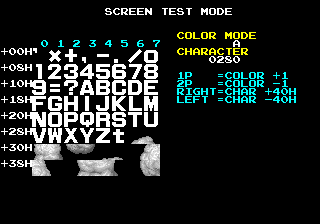 Displays the raw contents of the game's graphics in 16×16 tile form. They probably could have consolidated some of these tests. 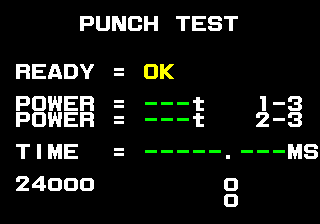 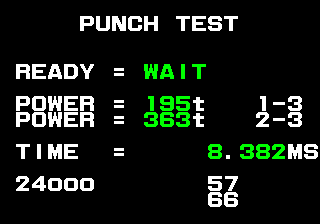 Does what it says: tests the game's punch pad, then prints out the data that the game uses to determine how powerful the punch was. The results are displayed for two seconds before the test resets.

Rounds 3 and 4 have their own debug tools that are normally disabled. Put this code in sbm.xml to re-enable these features: 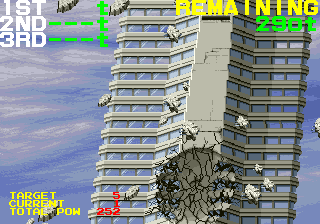 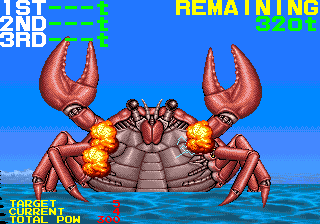 Three variables are displayed in the lower-left corner. "Target" is the destruction phase that the game will eventually reach this round, while "Current" is the current phase of destruction that the game is processing. In the above screenshot, the game is currently animating phase 1 of the building's destruction, which consists of shaking the building and drawing a giant impact hole in the bottom center. It will then animate phases 2, 3, 4, and then finally 5, at which point the building will be completely destroyed.

"Total Pow" is just the combined power of the player's punches so far. 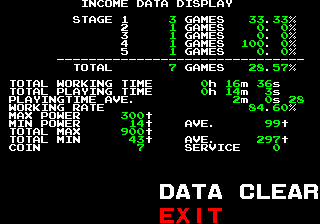 Hold 1P Start + 2P Start and press the Service button while in attract mode. This screen displays the number of games that have been played by round, as well as clear percentages for each round. Also displays total power-on and playtime, as well as the min, max, and average punch power, both individually and in totality.

Press 1P Start to change between "Data Clear" and "Exit", and press 2P Start to either clear the income data or exit the display screen.

A few notes on the older design:

The newer design only needs a single palette for each frame.

One look at the old design should give away why it was changed. Blue spandex; red cape, gloves, and boots; a pair of red shorts; and a yellow emblem plastered on the hero's chest... this is a DC lawsuit waiting to happen.

The older sprite, which would appear just before the title screen, has a flowing cape with four frames of animation. The new design reduces this to three frames.

To tone down the obvious similarities, the blue spandex was changed to gray, shoulder pads were added, the red cape was turned into a yellow scarf, and the "SB" emblem was replaced with a mounted clock and monitor.

His former red boots and shorts are now blue, the red gloves were swapped out with blue boxing gloves (which better fits the theme of the game anyway), and he's now rocking a set of blue knee pads. A true slew of new blue! While the belt around his shorts was white in earlier sprites (which was changed to red in the final sprite), the palette in this sprite was yellow for some reason.

The extent to which these sprites were changed varies wildly. For instance, the title screen sprite (the first one seen in this section) was completely redrawn, while this sprite carries over a lot of the original art, only with a different palette.

The core of Sonic Blast Man's body is identical between versions, but both designs take different approaches in the way they depict movement in the in-between frames.

Here, Sonic Blast Man's head is identical between designs, but every other element has been touched up in some way. The yellow lighting effect is slightly different in the new design.

Sonic Blast Man's design may have changed, but the woman he saves stayed the same. He looks happier in the old design, while the new design has a palette error that makes it look like that lady's been smoochin' him off-screen.

Whoever did the art for the newer design forgot to draw one of the knee pads on the first sprite, but since this sprite is normally zoomed out it isn't that noticeable.

The old sprite has Sonic Blast Man in worse shape than the final design. Where'd his legs go?!

The early ending sprite has Sonic Blast Man giving the peace sign in one hand and holding the lady's purse in the other. Obviously, the new boxing glove-clad design wasn't able to do a peace sign, but he should have still been able to hold the purse...

The sprite of Sonic Blast Man getting run over was redrawn in a somewhat different perspective.

There are also two different sprites for the woman holding the baby: The older sprite had a blank space for Sonic Blast Man's hand which had to be redrawn when he started wearing boxing gloves. The older sprite is bl_scnend11 (#666) in the graphics viewer, while the new sprite is bl_scnend11 (#800). The new sprite is the very last one in the object viewer and isn't in alphabetical order like the rest of the sprites, so this was caught very late in development.

The older design has an animated sprite with a different expression; he looks more frustrated than defeated.

Sonic Blast Man shakes the mayor(?)'s hand in both designs, but in the newer sprite, he has to take off one of his boxing gloves to do it.

Another instance of the strange head-coin design. The position of Sonic Blast Man's arms in the second sprite changed to have them both hang straight down.

Even this tiny sprite had to be changed, but they managed to fit all of the added bits and alterations into the new design.

This sprite, used in Round 5's ending, shrunk Sonic Blast Man's head a tad and added detail to his shades.

Two early attempts at a game logo for "Super Sonic Blast Man". The tilemap and palette are still in the game for the first logo, but not for the second.

Even though "Super" was dropped from the game title, voice clips in both the US and Japanese sets still refer to the hero as Super Sonic Blast Man.

...which he would then take off before transforming. At least he didn't do it in a phone booth.

To fill his hands with something besides the glasses, he was given a burger and a shake from a fast-food chain that starts with the letter M.

Big "E", "P", "R", and "U" letters. In attract mode, the game's title scrolls by in large print; after "Super" was dropped, these letters were left unused.

The stage select background originally consisted of a simple checkerboard pattern. The final background adds depth to the squares and two Taito logos.

The graphics viewers use a different, earlier palette for the game's buttons. Note that neither of the button graphics matches the actual cabinet's red and blue buttons.

There's also animation for the buttons being pressed, just in case that was ever necessary. Turns out it wasn't.

Two road signs and a trash receptacle for use in Round 2. No moterdrives allowed!!

Separate eye sprites for Taraber, the giant crab robot in Round 4. The set on the left is identical to the ones on the full crab graphic, while the yellow set on the right probably would have been used after getting punched.

Sprites for Taraber's belly hatch flopping open, revealing its mechanical innards. In the final game, the hatch goes from closed to open instantly by just swapping in a different background graphic.

There are two unused tracks in the game, unhelpfully labeled "Unused 1" and "Unused 2" on the game's OST.

The first is track 20. This foreboding track is the appropriate length and tone for the pre-round explanation screens, which are oddly silent in-game.

The second is track 23. More celebratory than the previous track, this likely would have been used on the high score screen. This track became used in the sequel Real Puncher as a result theme for both face-digitized game modes.

There's an earlier English script in the Japanese set. Put the following code in MAME's sbmj.xml cheat file to set the game's region to "USA", which will display the English text:

The earlier English text is a more literal translation of the Japanese script and contains a good amount of grammatical errors and awkwardly-phrased dialogue. The final English script does a better job of dressing down the player when they fail and praising the player when they succeed.

The US set contains leftover data from a prototype of Warrior Blade: Rastan Saga Episode III that's broken up in three blocks.

This is mostly boot code, but also contains text for the game's extensive RAM error handling. There don't appear to be any remarkable changes in this block.

This block includes text and code for the game's test mode and attract modes, the "Insert Coin(s)" strings, and export warnings.

The largest block contains data for the game's enemies, objects, and stages. This also includes the code for the high score entry; the list of special high score names has already been finalized.

Text for an enemy viewer begins at 0x4E05C:

Two different sets of instructions are at 0x4E26A and 0x4E2BC:

Text for a combat test starts at 0x4E416 in the main CPU:

A list of enemy types for this menu is at 0x4ECF6:

The Shield, Circlet, Celestial Globe, Pendant, Medallion, Ring, and Crown items were all added after this build, and the "Special Healing" item was later renamed to "Special Medicine". The Rainbow Crystal and Scroll of Ice items are nowhere to be found in the final game. 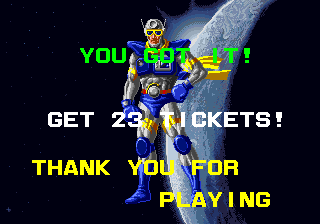