This is a sub-page of Strong Bad's Cool Game For Attractive People.

In the english.langdb file are internal directions for The Cheat's lines, used by Matt Chapman to give the little guy the right intonations. Find out what the talking cheese is really saying!

Since The Cheat has so many lines in this episode, only the more interesting lines are included.

All subtitles are ripped directly from the game's english.langdb script file. Any errors or inconsistencies are intentionally preserved.

Several lines of dialogue have alternate versions left in the voice archive. Interestingly, four of these lines were rewritten because they mentioned real life products. 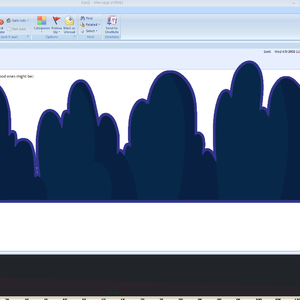 env_bushedbgbridge has an image apparently from the texture designer in an e-mail viewed in Windows Live Mail. In Homestar Ruiner, this image has a proper alpha background.

This early Fluffy Puff Mayo label is written in Comic Sans, is spelled wrong, and shouldn't even exist since the newer label was already in the previous episode. Three strikes, it's out.