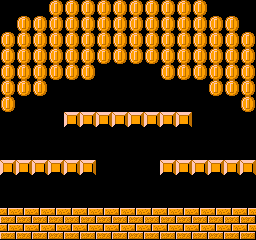 A stage which has a large arc of coins and an otherwise-unused block graphic. When a coin is collected, an incorrect tile appears in its place. There is in fact code related to this level that instigates a timer which expires and then decides that Mario lost the match. Presumably, the player who collected the most coins would win, but the code that would handle this isn't in the ROM. 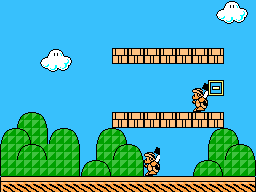 This should be the World 7 Hammer Bros. stage, but there aren't any Hammer Bros. on the map. This room design doesn't appear anywhere else.

The entire area also appears kind of bland compared to 5-3.

This level doesn't really resemble anything in the game. It looks most like 3-9, with the pipes connecting to a water area, though the enemy setup is completely different. However, the ending is particularly strange: you appear out of nowhere, and if you attempt to go into the pipe right in front of you, you'll arrive in a Coin Heaven (also appearing out of nowhere) which leads to a treasure box containing a Lakitu's Cloud.

To find the real exit, you must fly over the pipe and the blue structure.

This hilly level with Lakitu and several continuous Starmen is most likely an early version of 7-3. Note the presence of Goomba's Shoe; the development team likely wanted the item to appear in other levels besides 5-3, but for some reason this never happened. Also, the entire area is almost completely devoid of ground enemies, and the pink Note Block leading to Coin Heaven is extremely difficult (although not entirely impossible) to activate, because it tends to immediately bump you down into the pit if you attempt to hit it.

There's also a single stray coin floating in the sky, for some reason.

Appears to be a more challenging version of 1-5, with Piranha Plants awaiting you at the foot of each slope, and no Coin Heaven. Also note the odd side-by-side doors at the beginning of the level.

Contains many unused Tanooki Suit bonus rooms, presumably as a quick way to test bonus room layouts before putting them in the game. A walk-through-walls Game Genie code such as AOSUZI or YLLLLI is necessary to explore all the rooms. While the wall pipes simply return you to the world map, the ground pipes lead to an empty room where you fall to your doom.

Appears to have been planned for World 6, but was completely removed altogether. It features many Cheep-Cheeps and Fire Chomps, and the whole level moves up and down. It also showcases a bug in the game: jump on the middle of the moving platform as Super Mario and stand still. When you pass the wooden block, you'll stomp the Cheep-Cheep and the Fire Chomp and then be standing in mid-air.

Interestingly, a pointer to this level still exists on top of the START tile in World 1. Nintendo most likely placed a level tile here during development in order to quickly test out new levels. To make the level accessible via the START tile, use Game Genie code EOSKNTEL (US/Japanese version) or EOVGSTEL (European version).

This autoscrolling level with Jelectros immediately reminds one of an icy version of 7-4. It's possible that this level concept was first planned for World 6, but then got pushed back to World 7, leaving this stage unused.

The powerup right at the beginning is nearly impossible to collect, because the screen immediately scrolls down and you pretty much need superhuman reflexes to collect the powerup before it disappears. The level also features the unused Gold Cheep-Cheep enemy, although in most cases few or none of them will appear due to sprite overload.

A vertical level which requires you to swim up all the waterfalls to get to the exit. The level is a bit short, has no enemies at all and no proper exit. It could very well have been part of a larger level, like 7-1.

This rather bland level features blocks moving up and down and Para-Beetles, including the unused green variant. Much like Goomba's Shoe, Para-Beetles are used in only one level in the final version. Obviously, this stage is far from finished. 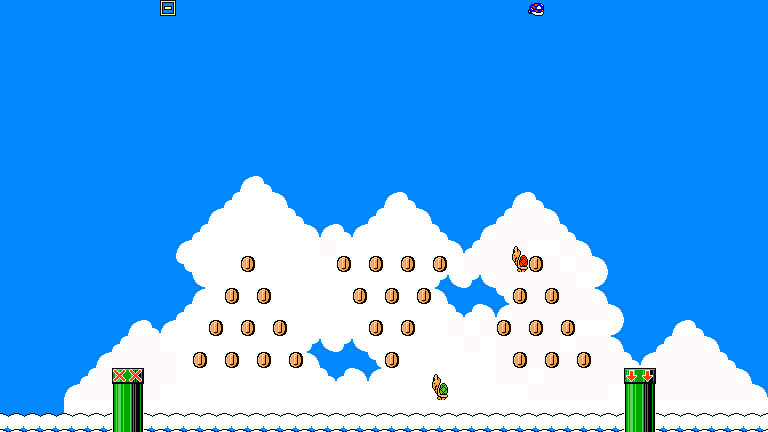 Uses the same sprite table as the previous level, which is odd. It was possibly supposed to be some kind of Coin Heaven, though none of the ones in the final game have entry pipes.

Appears to be an early version of 1-6. The major change is the lack of line following platforms (there are two platforms but they only go back and forth). There are also some more enemies.

Yet another version of 1-6, but it's much more incomplete. It doesn't even have a goal, so your only choice to end the level is to fall into the pit. The starting position is also weird, as it's way above the ground.

This is almost identical to the previous level... almost. The ground is one block lower, and you don't start somewhere in mid-air.

One odd level. It has no exit, and no enemies at all. The most interesting feature of this level is the starry background at the top, which went completely unused in the final game.

This level doesn't make much sense from a design standpoint, and looks more like a test level than anything. It has a Hammer Brother (who will never show up in-game), stacked cloud platforms (unused outside of this stage), an inactive Bullet Bill cannon, and a control block to end the level when you open the treasure chest.

This stage exit is located to the right of 4-5's Tanooki Suit room. It's not used in 4-5, or anywhere else for that matter.