This is a sub-page of Super Mario Galaxy.

Zones are spatial areas of a galaxy, and they include planets, objects, and various other data used in that part of the stage. The Glassy Twins and Pole Unizo Zones can be seen in action here, while the rest of the zones can be seen here. 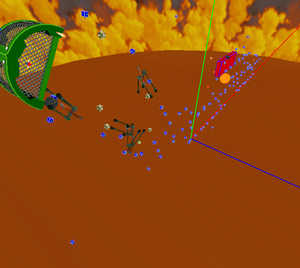 An unused part of Bubble Breeze Galaxy. The only solid land is a small metal platform. Everything else is a maze of hazards, with lots of wind, steam geysers, and a small sun that shoots fireballs. Given all this, it is clear this zone was meant to be heat-based. This zone sheds some light on the peculiar name for the level: the bubbles that are produced here are cubic! The option to change them to cubes can be set through specific parameters given to the bubble generator object. As a rare treat, the zone actually has its own Power Star. 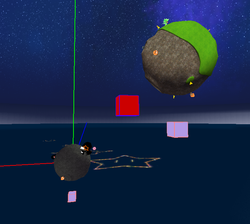 One of the unused zones left in the game. It features the Glassy Twin Planets and a handful of crystals. Yellow Star Chips are scattered around the second planet, but collecting them does nothing. Interestingly, the two planets are resized to 133% and 150% size, respectively. 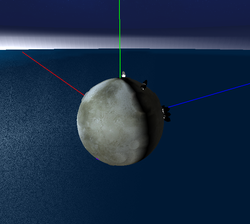 The name indicates it was meant to be part of Gateway Galaxy, which has Small and Medium zones. The only notable feature is a camera object that zooms out from a particular spot to show the planet from a fixed view. The moon planet it uses was reused in Deep Dark Galaxy for Kamella's entrance. 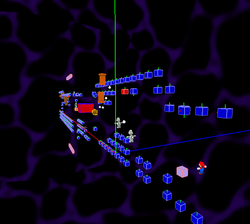 A zone meant to be the first or second area in Bowser's Galaxy Reactor. All of the solid ground is made of blocks stuck together, with lots and lots of firebars and hazards.

An alternate of the ice maze planet from Space Junk Galaxy, but filled with Boos and eerie lights. It's listed in Ghostly Galaxy's ZoneList. It also has a Power Star. 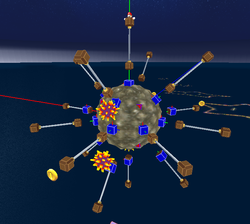 A zone featuring the PoleUnizoLandPlanet, with the planet itself surrounded by a shallow body of water with Urchins inside it. It is listed in Deep Dark Galaxy's ZoneList. There is not much to do here beyond hopping from pole to pole.

Consists entirely of two pink bouncy balls floating next to each other. That's all. Like PhantomIceMazeZone, this zone is listed in Ghostly Galaxy's ZoneList. 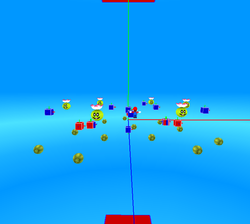 An unused zone meant for Dusty Dunes Galaxy. There is no actual planet, but given the position of the coconuts and Pokeys, and the disk gravity, it seems the planet was meant to be a disk. 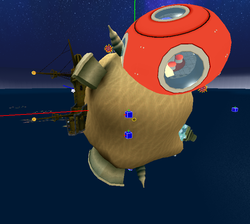 An unfinished Drip Drop Galaxy, made out of the original model parts that were later incorporated into the final planet model used. The planet used is DropOfWaterPlanet, whereas the final Drip Drop Galaxy uses TearDropPlanet. It is also worth mentioning that the zone has 17 layers defined, but most of them are unused. The zone contains a Treasure Chest, Bill Blasters, the unused Super Mushroom, Urchins, swimming Gringills, Air Bubble Generators, fallen Airships, Toad Ships, Koopa Shells, and a Power Star. Also, the Torpedo Teds are launched from cannons sticking out of the sand, whereas in Drip Drop Galaxy they simply emerge from the sand. 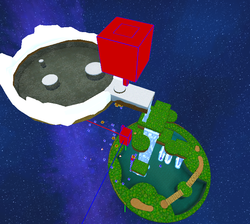 An early version of the ColdTwinFallZone used in Beach Bowl Galaxy. The map was apparently built using an older version of the planet, which was relatively upside down compared to the final. As a result, everything is floating in the air, and there are random patches of water. Interestingly, it uses a Spring Mushroom for its puzzle rather than a Cataquack.

An entry in the object list table indicates this zone was to appear in Gusty Garden Galaxy, and would in fact still use ice as part of the puzzle. However, it is listed in Good Egg Galaxy's ZoneList for some reason. A glimpse of this planet can be seen in an early screenshot for Gusty Garden Galaxy.

Retrieved from "https://tcrf.net/index.php?title=Super_Mario_Galaxy/Unused_Zones&oldid=639701"
Categories:
Cleanup > To do
Subpages