Super Real Mahjong Dousoukai is yet another mahjong game, and it has teenage anime girls and you can get pictures of them in bikinis if you beat them. This may or may not be acceptable, depending on where you are playing this. 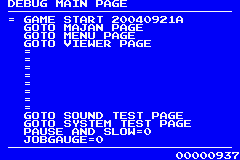 The player can see the menu pictured above by enabling the CodeBreaker code 03001030:31 and going to any place new. Throughout all the menus in this section, a counter can be seen on the bottom right that shows how many frames have passed since beginning the game.

Various options are filled in with "=", but are not selectable and may have been dummied from a master menu set. 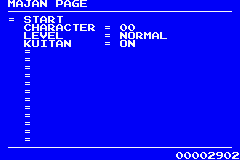 Play a quick game of mahjong from here. Make sure to turn the cheats off if you want to actually play a game. 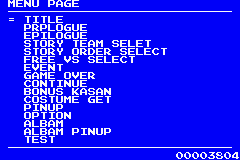 A whole list of options is available here. Make sure to turn the cheats enabled off to go to any of the events specified. After going through the menu, the player is sent back to the menu page.

Pressing A again goes to the next text box. After pressing it three times, the game switches to a different character. Pressing B makes another text box appear:

Pressing it again makes the box reappear, but with a different character.

Start makes the dialogue box completely disappear, but can be brought up again with either of the above buttons. 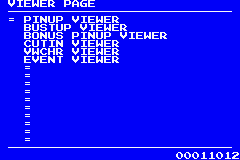 See most of the graphics from the game. 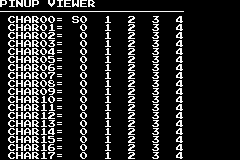 As described above, this allows one to see all of the pin-ups one can collect throughout the game. 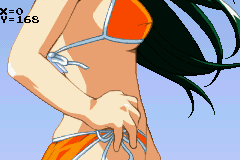 The controls are very simple: Press Left and Right to move the picture along the X axis, or Up and Down to move it along the Y axis. Press B to go back to the menu. 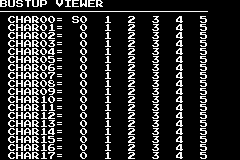 This allows the player to see various portraits from story mode. The only controls upon selecting a portrait are pressing Select to change the backgrounds, and B to go back to the menu. 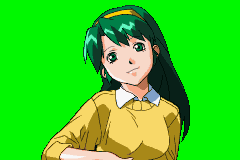 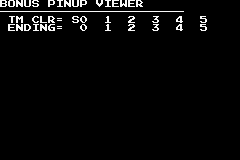 See more pin-ups. Press B to go back to the menu. 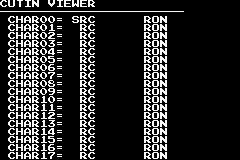 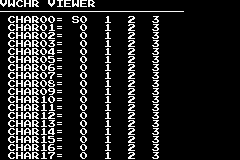 After selecting an option, the player is able to see some of the characters' story mode portraits. 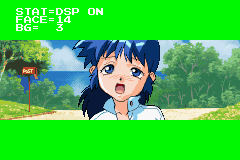 Controls are also a bit more complicated than before: 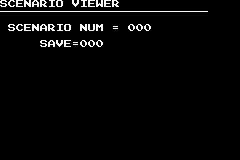 With this, the player can see all of the events available, along with a brief description about the event below. Note that going to Scenario Number 263 will freeze the game, as no description is available. 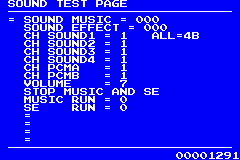 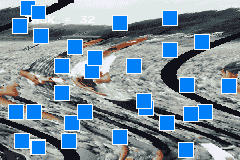 A menu that presumably tests the CPU. While it isn't accessible from the main debug menu, the player can reach it by enabling the CodeBreaker code 03001030:2D instead of the above code. The background wobbles around, while squares continuously pop up on screen. The squares shrink over time and eventually disappear. When there are only a handful of squares left, a random number of squares appear on screen in a circular pattern. The barely visible task counter on the top left shows how many of these squares are being rendered. 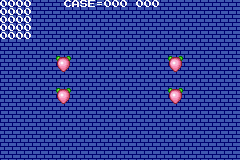 A rather unusual menu that can't be accessed from the main debug menu. The player can reach it by enabling the CodeBreaker code 03001030:2E rather than the main debug menu code. The player can move around the top-left sprite around, make the game slower by holding R, and pause it for five seconds by pressing L. Pressing A enables the first case, while pressing any other button afterward disables it. 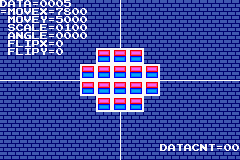 This menu is a sprite test, but this also can't be accessed from the main debug menu. The player can reach it by enabling the CodeBreaker code 03001030:30 instead of the main debug menu code. On the bottom right corner, there's a counter called "DATACNT", which shows the frame that is currently playing.

The player can use R and either Up or Down to do one of the following:

In addition, the player can press A and B to look through some of the sprites.