A somewhat unremarkable solitaire game notable for having one of the oddest cases of localization out there.

...and some catchy music too.

As mentioned, the game's Japanese version, Trump Island, features one of the oddest cases of localization of a game like this. Perhaps feeling that the original art was a bit generic, the people at Pack-In-Video decided to enlist the help of artist Takami Akai, at the time a member of Gainax, and most known for creating the Princess Maker series, to create new artwork and make it more palatable for Japanese audiences, which probably didn't work as Famitsu gave it a score 21 out of 40. The game itself features downscaled versions of the artwork, but the original versions were later included in his 1998 artbook Akai Takami WORKS.

There is also a prototype for an unreleased European version, to be published by Beam themselves (under their Laser Beam label) but besides some minor differences it's identical to the released US version.

Not only is the information different, but the actual screens themselves look different too. Trump Island's lacks the game's name and the "LICENSED BY NINTENDO" (as well as removing Extreme's mention) but adds copyrights for Pack-In-Video, Mr. Akai, and an "M.TSUDA CO.,LTD."

Trump Island, expectedly, lacks both the Extreme and Beam logos. The European prototype also lacks Beam's logo, although it's understandable in this case as Laser Beam and Beam Software are the same company, and including both would be redundant.

Super Solitaire's title screen has the King and Queen come from their respective sides of the screen and, once united, a small holding hands animation plays. In Trump Island the logo, icons and girl come on the screen in a similar way.

The icons themselves also differ. While Super Solitaire has three different illustrations for each option, Trump Island instead has three flowers with "G", "O" and "P" on them, representing what each choice is ("G"ame, "O"ption, and "P"assword)

Both versions of Super Solitaire have the same options screen (complete with French flag in the wrong order) with the only difference being the change of flags for the English language option. Trump Island lacks the language selector, labels each option, and changes their icons. It also recycles the girl from the title screen.

There is also a green oval at the bottom labelled "Option", but clicking on it does nothing.

The password screen on Super Solitaire lazily reuses the same background as the title screen, whereas Trump Island has a separate screen... that also reuses title screen (and options) artwork but mirrored. At least they did shift it to the side so as not to be covering the girl.

Both have the same "WRONG" for when you input a wrong password, although Trump Island's is at a higher position.

Both the Euro prototype and US version have the same menu, but the American one adds a small frame noting which game is highlighted, and differs in the position of the "OK" and "X" icons.

Trump Island instead features, as the name indicates, an island, with various different places representing each of the games... or at least the artwork for most of them. It also changes the tournament icon from a trophy to a lifesaver with "Vs." inside it, and the "OK" and "X" icons are now cutesy dolphins.

Unlike the lively game selection screen, the tournament menu on Trump Island is pretty much identical to its original counterpart, barring the translated game names and changed background. The results screen is also the same besides the background.

The (somewhat poorly digitized) picture of a mountain is replaced with an illustration of a princess standing outside a castle at night. Fancy.

What seems to be the outside of a castle is replaced with... a traffic officer. Interestingly, the original illustration of Akai's Trump Island version (as seen on the previously mentioned Akai Takami WORKS) also features a strange-looking creature riding a reptile-like creature.

One of the few illustrations that's similar in theme to the Super Solitaire original. With the addition of a cat, a bear and a pelican wearing shades, because why not.

From menacing things such as a skull, a gun and even a noose... to two friendly-looking vampire ladies. Cruel, that one.

Another one that's thematically similar to the Super Solitaire original, but with the addition of a very anime-esque Cleopatra-type person.

Stonewall on Super Solitaire has various stone walls. Stonewall on Trump Island, meanwhile, has a lady clearly prepared for some adventuring.

The Super Solitaire original features exactly a dozen eggs hatching, amongst other things, a duck, a rhino, a cockroach and a football player. For Trump Island they decided to replace it with schoolgirls. Five of them, not even a dozen.

Goofy, cartoony-looking suits turn into a girl laying on the beach in a swimsuit.

Another odd change, this time with a (also poorly digitized) photo of an old building replaced with a woman in a sexy nurse outfit. Holding a needle.

While Super Solitaire's version features classic pieces of art (complete with poorly drawn additions on some), its Trump Island counterpart features an astronaut floating around.

Expectedly, the Super Solitaire version features a scorpion, alongside what are some very colorful mountains. For Trump Island, expectedly, they replaced it with a woman, this time standing to the side while a moon is present. Said moon happens to feature a drawing of a scorpion embedded to it.

Super Solitaire has essentially the same screen for whenever you win or lose a game. A jester pops out of a jack-in-the-box and starts swinging around, with the only differences between the two being the expression on the jester's face (the "lose" version has him with his tongue sticking out and one eye wide open), the actual text on his sign, and the addition of confetti on the "win" version.

While neither screen on Trump Island is animated, they at least are different illustrations, and much better looking to boot.

Trump Island fully translates the in-game menu options, as well as replacing the "$" with a "G". 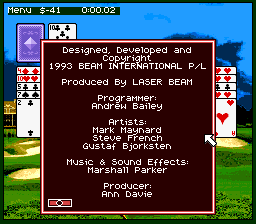 The two versions of Super Solitaire have this credits screen, accessed through the "About" button on the in-game menu. Trump Island lacks that button. Apparently Pack-In-Video didn't want Japanese audiences to know that their very Japanese-looking game was developed by a bunch of Australians. As for these credits, they're the same on both the European prototype and the final US release, despite the latter not being published by Beam/Laser Beam.

Another difference between both is on one of the selectable "card backs". The "rug" card back on Super Solitaire, as the name indicates, looks like a rug. Perhaps feeling that it was somewhat bland and a bit similar to the default diamond card back, Pack-In-Video replaced it with an illustration of a cat, the same one seen on the Golf background.