Super Spike V'Ball teaches us that title letters are a precious, precious resource and should be conserved whenever possible. 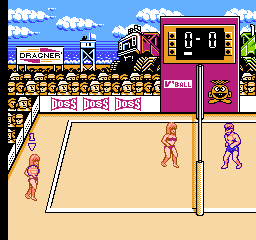 There is a complete set of unused graphics for 4 female teams in the game. With a Game Genie code it is possible to unlock them. These codes only work on the characters for the left side of the court.

Present only in the Japanese version at 0x1FF90 is this small string:

The game was originally titled U.S. Championship V'Ball on the Famicom and was loosely based on a prior Technos arcade game. When the game was localized for the NES, the title was changed to the less U.S.-centric Super Spike V'Ball. Perhaps Nintendo (who published the NES version) didn't want other countries to feel left out. Thus, the stars and stripes on the "V" were removed and the entire V'Ball logo is now drawn with purple fonts.

On the main menu screen, "single" was pluralized to "singles". The "O" font used throughout the game was also redesigned, likely to make it look less like a zero. 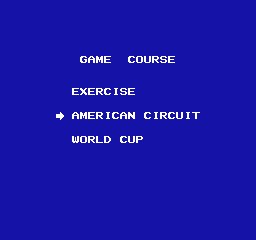 The NES version splits the content of Tournament mode into three different courses, each set to its own difficult level.

As a result, the "rank" option on the configuration screen (which sets the Tournament's difficulty to one of three settings: Easy, Normal and Hard) was removed, replaced with the option to turn off the music. Moreover, "point" and "set" were properly pluralized, "auto toss" became "auto set" and "Los Angels" on the stage selection setting was corrected to "Los Angeles". 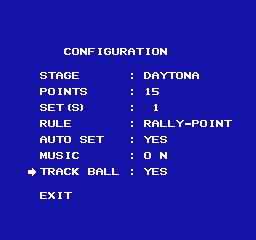 The option for track ball controls seems to be absent in the NES version at first, but it was actually hidden away with a cheat code. To access it, enter the configuration screen and move the cursor to the "Music" option. Afterward, hold A + B on Controller 2, and then press Select or Down on Controller 1. This option was originally for the Hori Track Ball controller, a Famicom peripheral that was released only in Japan, but it seems it was kept just in case an NES equivalent was produced.

The Tournament mode in the Famicom version consists of 10 matches. It starts with the American Circuit with five matches, each set on a different court in the U.S. mainland. It then moves on to the World Cup in Hawaii for three additional matches against teams with randomly-assigned nationalities out of five possible countries (the teams themselves are always the same though). The Tournament then ends with two special matches against the U.S. Navy and the U.S.S.R., both set in unique home courts.

The NES version splits the American Circuit and World Cup into different courses. The American Circuit consists of the first five matches from the Famicom version's Tournament mode set on the normal difficulty, ending with the L.A. match. The World Cup course consists of all the teams fought in the latter half of the Famicom version's Tournament mode (including the special Navy and Soviet matches at the end), plus two new teams for the third and fifth matches (who are reuses of other teams). Unlike the Famicom version, the World Cup teams in the NES version are given fixed nationalities, since it makes use of all five of them.

The NES version also adds an additional Exercise course, which is just a single match against the Daytona team in an exclusive court set on the game's lowest difficulty level. The background music used for this court is completely new as well and unlike the other courts, the tension theme isn't played when a team is about to win. After completing this match, the game goes back to the main menu.

The character descriptions, which were already written in pretty comprehensible English for the Famicom version, were further cleaned up for the NES localization, with all the characters (not just the Lee brothers) now describing themselves with plural pronouns in order to emphasize the team aspect of the game. Unfortunately, they left out an "OF" on George's self-description, while the "YOU" on Al's self-description somehow ended up with a miscolored "U".

Note that George and Ed traded partners during localization, eliminating two rather subtle celebrity shout-outs from the game.

On the player vs. player mode, convenient arrows and numbers were added above each character's head on the team selection screen, indicating which character is controlled by which controller.

These arrows are also used during gameplay in place of the original 1P-4P markers used by the Famicom version.

All the courts in the game were changed in some form or another.

This practice court is exclusive to the international release.

The clouds were redrawn, the mascot character on the scoreboard was altered, and the "LlouorA" (?) logos were changed to say "V'Ball".

The sign in the top-right corner was slightly altered to say "CHERRY" instead of "SAKURA".

The text on the scoreboard was changed from "Mori SOBA" to "PIZZA".

The tiny "USC" logo on the scoreboard was changed to "USA". That's it.

The crowd's faces were slightly modified, and the text on the sign in the top-right corner was changed from "Hagodda" to "ICE CREAM".

The crowd's faces were slightly edited.

The backdrop was completely redesigned from an imposing row of tanks to a building.

The Hawaii court originally had its own theme music in the Famicom version, since it's only used for three matches during the latter half of the Tournament mode. But since the court is used for five straight matches in the NES version for the World Cup course, the music changes for each match (reusing themes from other courts) in order to keep the soundtrack from being repetitive. As a result, its originally intended theme music is only played on the 5th match against Brazil. It's not even used on the Player vs. Player mode!