Super ZZT: Like ZZT, but super. Introduced scrolling, hints, larger rooms, new gameplay elements, and more colors (without the need of the STK) to the ZZT saga, but despite all this never really obtained the popularity of its predecessor.

Much like its predecessor, Super ZZT has a fairly easily-accessible cheat console which can be activated simply by pressing the ? key and then typing in any of the following commands, all of which appeared in the original:

As in ZZT, typing in + or - followed by the name of a flag will set or clear that flag. Additionally, two more ? commands were added, centering around the "stone of power" object.

It is also possible to name the stones of power by setting a flag that begins with the letter Z. For example, +ZSTONES.

Super ZZT added a few more undocumented commands and features to the engine and code interpreter: 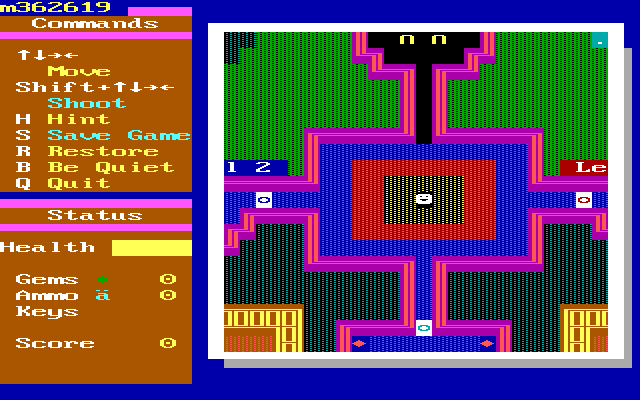 Using +DEBUG on the cheat console will activate debug mode, which is quite similar to that in classic, non-super ZZT. The letter "m" followed by some numbers is shown on-screen, now in the top-left. This value is the number of bytes remaining in heap memory for objects on the current board and the entire compressed data for the game world being played. Naturally, this also sets the flag "DEBUG". 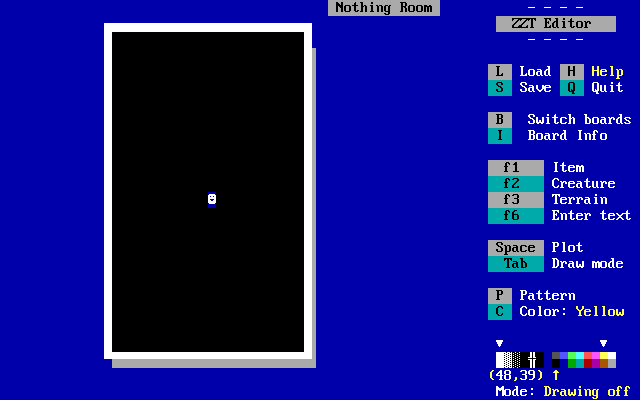 Unlike its predecessor, Super ZZT has no apparent editor option, and seems to only play its built-in games. But looks can be deceiving- the game contains an editor, a direct successor of the editor found in the last game. Unlike ZZT, this editor probably was likely not intended for public use: many features are undocumented in the menu system, and it still uses the prior game's resolution. It can even edit the official games without requiring the DEBUG cheat.

To access it, load the game from the command prompt with the command superz /e, and then press E while on the Monster Zoo screen.