Synthetik is a top-down bolt-action roguelike-like shooter from Berlin, tasking willing cyborgs to fight their way through a swarm of mechanized menaces to reach and stop a doomsday device known only as The Heart of Armageddon.

These have been released by Shrike alongside the weapon modding update.

Apparently the tank was planned to be a boss at some point, instead of being a guardian of the final boss.

The 12.7mm turret has red drums/coils on the back, in the current version of the game.

The little Roomba robots found in most levels were planned to have a close-range attack.

An explosive variant of the fast melee enemy was planned and scrapped before it got any other directional sprites. Most likely replaced by the Spiderbot and Doomba.

The Machine God of War, Zir is seen on the right side of this picture. The filename implies it to be a splash image for either a launcher or a loading screen.

A whole motherboard of transistors, batteries, and heatsinks.

Filename calls it a God Shrine. Compared to a normal quest shrine, it's rounder, darker, and the surrounding tubes are pointed upward.

The only god it can be dedicated to is the Machine God Zir, as he is the only Machine God that appears in Synthetik: Ultimate.

An object named "constructor" with three slots for batteries, just like the battery that appears in the daily data bonus window. Appears in the weapons test devroom.

It is not known what it would construct.

A shot of Mars with fiery cracks along its surface.

These pictures from the opening and ending cinematics are normally obstructed by text.

Present in the main folder. Despite its name, it's actually a duplicate of a gunshot sound used by assault rifles in the game.

Present in the same folder as the executable.

This track was used in Version 1, in the tutorial/firing range area.

Cut boss enemy that bears a resemblance to an Apache helicopter. Appears on one of the trading cards on Steam.

Not much is known about its function, aside from it moving up and down and shooting, similarly to Last Defender, which in turn moves sideways and shoots downward. It was cut probably due to it being too similar to other bosses.

Despite its files calling it a boss, it uses the normal enemy healthbar in the screenshot.

These sprites show that another type of turret was planned.

This one would have fired grenades just like Enforcer, Headhunter and Red Guard Nemesis.

A weapon testing room. Includes the unused Constructor object and two unused shrines, plus shrines from the Arena game modes and the God Shrine. 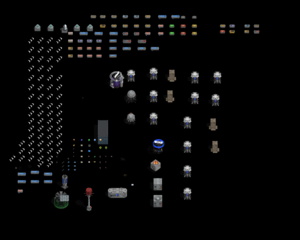 The firing range has some objects to the left of the teleporter, which are never visible in gameplay. Some Headhunters can also spawn out of bounds. 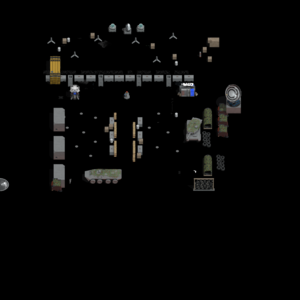 Not to be confused with the one used by the Engineer class.

Slows down time for a duration.

Grants a short-duration movement speed buff after usage. Higher item power increases this duration, but does not increase the duration of the time slow itself.

No longer obtainable due to frequent crashing.

All buffs, debuffs, and any non-stun status effects currently applied to enemies will stop for 10 seconds while active.

Covers any status effects applied to the player, including stuns.

No longer obtainable. Replaced by Refresher, purchasable in an Alchemy store in-game instead of being a starting item.

Shoots down bullets mid-flight, can overdrive for increased effect.

Recycle bonus: keep a weaker version of the drone

Destroying a boss enemy charges the chip with energy. Use to permanently unlock a new microchip.

Tied to an unused mechanic. Unobtainable.

Obtaining four of them used to grant the player the A R M A G E D D O N machine gun, with a random variant applied to it.

Armageddon Shard is now the name of an item that grants immense stat boosts to the player, but kills them after completing three rooms.

Code referring to a Fire Grenade that would increase weapon heat on use by 25, making it functionally similar to the Acid Grenade, listed just above it.

They are referenced in the mod weapon balancing file, but when trying to use it, defaults back to 5.57mm Kaida SC, which is the caliber most AK rifles use in this game.