Not sure about the Soapstone Icon

The game seems to have the soapstone icon somewhere but I can't seem to find it myself, the wiki is all I've gone by so far. I'm assuming that this Icon would be present in the standard console versions because I do not see it in the Prepare to Die Edition Release. Peculiarly, I've seen this cut out spot in one of the menu textures so presumably they cut it out before shipping that release? --Mub (talk) 13:02, 18 April 2015 (EDT) 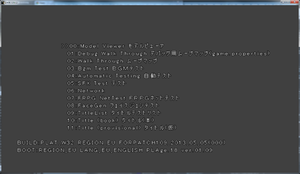 There's a debug menu in the PC version as well with the same list of options (albeit translated somewhat more thoroughly), but I've no idea how to expose it--it showed up the first time I ran the game after the Steamworks patch in December 2014 and then never again. The same way as the 360 version?