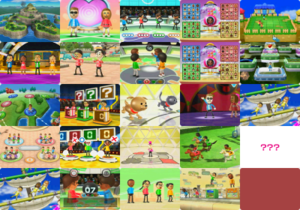 I was messing around with the dump textures feature in Dolphin and stumbled onto this. It's a picture with mostly just normal screenshots, nothing notable, except for 2 particular images. The screenshot of Buddy Quiz with Mii's holding signs, and the screenshot of multiple Mii's holding bombs. As far as I can remember (I rarely play House Party) these aren't modes in the game, but they do almost look familiar. --Wipeoutjack7 (talk) 23:59, 21 November 2019 (EST)