Tattletail bears more than a slight resemblance to Five Nights at Freddy's, though this game allows you to move around for once. Instead of a restaurant though, you, as a child, have to take care of a slightly vexatious Fur-uh...Tattletail. However, you have to do a set number of objectives for each night, all the while trying to avoid the toy jumpscare that is Mama and also having a flashlight in hand.

There are some unused (or /some/ possibly undiscovered) voice lines in the game from Tattletail.

Tattletail making train noises. Assuming there was a reason, it's uncertain why.

The 3 voice clips above all seem to be rest-related. They may have been intended to be used for Tattletail's repackaging/rewrapping, or even in relation to their charging/battery status. Vaguely reminiscent of Furby's snoring, which the Tattletail toy was clearly based after.

"Shut the door!" (This time with a more frantic demeanor).

Likely in reference to the mess the player has to clean up that Tattletail makes.

Likely would have been used in the hide and seek portion of the story.

"Why you do bad?" - One of the lines used for when the player jumps off the map, Tattletail scolds the player.

"You broke it." - Another line for Tattletail when you're falling out of the map.

"Why did you do this?!" - Once again, another line that Tattletail says when you're falling out of the map with him.

"You ruined everything..." - The last line for when you're falling out of the map with Tattletail. 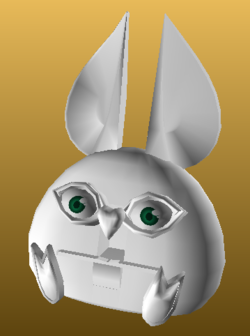 There is an unusual-looking rejected model of what appears to be an early version of the Baby Talking Tattletail with an entirely different design. Although there are no existing textures for the model other than the eyes. An interesting fact that this unused model perfectly connects to the titular character's early concept sketches by the game's creator, as shown from this Tweet.