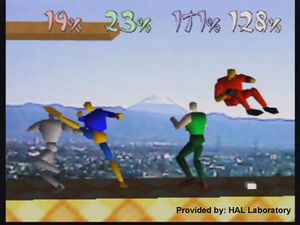 Before it became the game we know and love, Super Smash Bros. existed in a prototype form lacking any Nintendo characters whatsoever. The prototype in question, called Kakuto-Geemu Ryuoh (格闘ゲーム竜王), translates to Dragon King: The Fighting Game and was planned as a totally new IP for the company, lacking any contemporary Nintendo characters. It is actually referenced to as "Test Version" if Satoru Iwata's name is selected in the game's credits. Not knowing if their approach would be well-received by players, the two creators focused on creating a game with four players that utilized the Nintendo 64's joystick, and built it as a creative, easy to play alternative to other games in the fighting genre, which were the main reasons for them to develop the project, with the help of one person for the audio.

From the limited resources available (4 pictures are the only physical remnants of the prototype that exist), it's safe to say that "Ryuoh" has almost nothing in common with the final product visually.