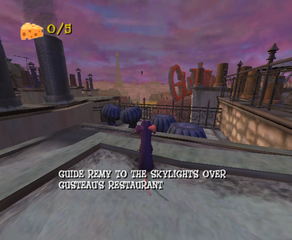 Ratatouille is a licensed platformer based on the 2007 Disney/Pixar film.

Pictured here is an early prototype of the game on the GameCube developed by Heavy Iron. This version would be retooled by Asobo Studios, while Heavy Iron would develop the Xbox 360 and PlayStation 3 versions of the game. It seems the famous scene from the film where Remy peers down through the kitchen skylight was originally planned to be a full playable level in this prototype, before being hacked down to a tiny mission in Asobo's revision and then removed altogether.