From The Cutting Room Floor
< Template:FeaturedFile‎ | 10-27
Jump to navigation Jump to search 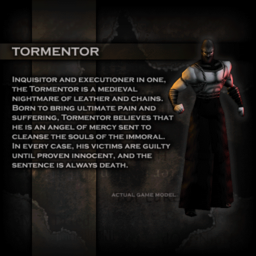 Thrill Kill may be one of the best-known games to never hit store shelves: A four-way fighting game starring a cast of twisted characters who have died and descended into Hell and are fighting for a second chance at life, the game featured over-the-top and graphic finishing moves called "Thrill Kills" and a fair bit of BDSM imagery. While the game was finished, intended publisher Virgin Interactive was acquired by Electronic Arts in Summer 1998. Not long after, EA cancelled the game's release, afraid that such a game might harm their image (they've since proven that they can do that just fine on their own).

However, due to the game's notoriety, builds of the game have leaked in both censored and uncensored forms. Pictured here is a character bio likely from when the game was shown at E3 1998, but only remains as a static screen in the earliest available prototype. The file would be removed by the 'final' version.