From The Cutting Room Floor
< The Legend of Zelda: The Wind Waker‎ | Unused Rooms
Jump to navigation Jump to search
This page contains changes which are not marked for translation.

This is a sub-page of The Legend of Zelda: The Wind Waker/Unused Rooms.

This archive is called A_nami, which translates to A_wave. It contains an invisible island. The reason the island is invisible is because its model is missing from the file.

The map file shares several similarities with another unused map called VrTest. For one thing, the two use the same collision mesh. Second, they have very similar actor setups, although A_nami contains two extra Bokoblins, a Moblin, and some large trees. 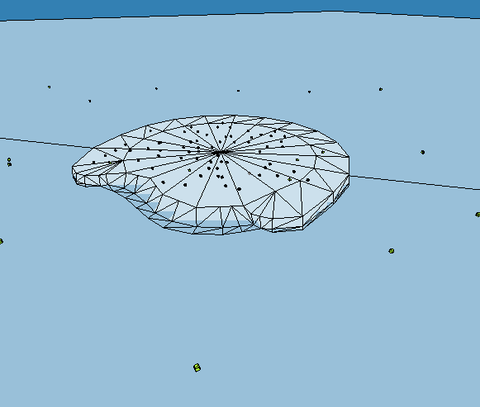 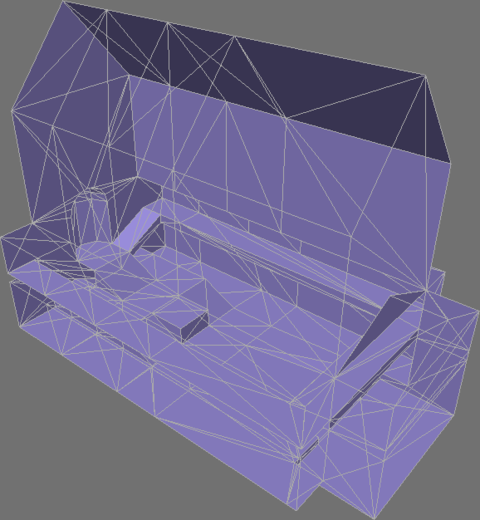 This archive is called A_R00, which stands for A_ROOM00. It contains a file that uses the .bmd extension, which suggests that it is a run-of-the-mill binary model file for the GameCube. However, it is actually in a strange plain-text format. When converted to .bmd, it is revealed to be the collision mesh of an earlier version of Hyrule Castle's interior. According to the file's header, it was generated on July 19th, 2002, 6 months prior to The Wind Waker's Japanese release. 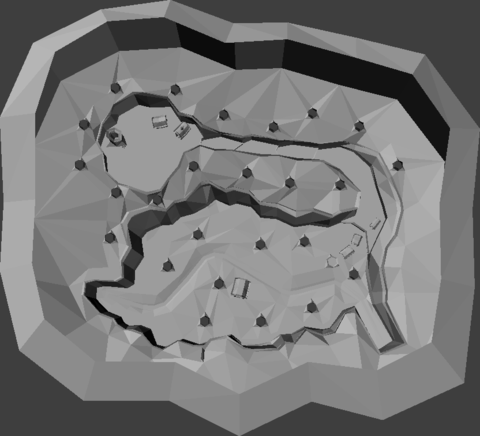 The archive also contains a regular DZB collision mesh. This one matches a forest area shown in the very first trailer for The Wind Waker, in which Link is shown battling a pair of Moblins, and admiring a group of glowing particles reminiscent of those in Forest Haven. To load this area via the game's map select, called "Rm00 Test", the Hyrule Castle .bmd must either be replaced with a regular model format or deleted entirely. However, it is rather unstable and frequently causes crashes.

Despite dating from early in The Wind Waker's development, the layout of the area resembles the final game's Forest of Fairies. The forest, found atop Outset Island, is where the Helmaroc King drops Tetra at the beginning of the game. It also contains a fairy fountain. 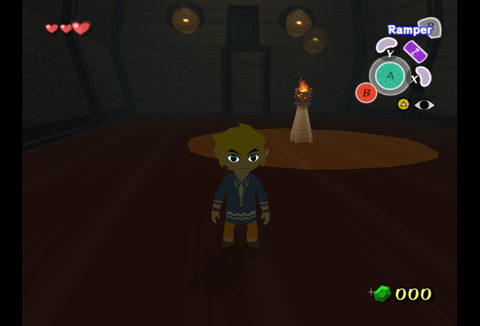 This archive is called Abship. It contains all of the Submarine maps, including Room3.arc, which is never loaded in-game.

The room itself is indistinguishable from the other submarine maps. A lone torch is positioned at its centre. The small chamber that would once have held its treasure chest is empty. A ladder that was intended to grant access to this chamber once Link had solved the submarine's puzzle remains embedded within the ceiling. However, since the room lacks a solvable puzzle, the ladder cannot be activated, rendering the treasure chamber unreachable without cheating.

Attempting to leave the room via the doorway crashes the game. This is likely because the room doesn't appear to have any defined exits. 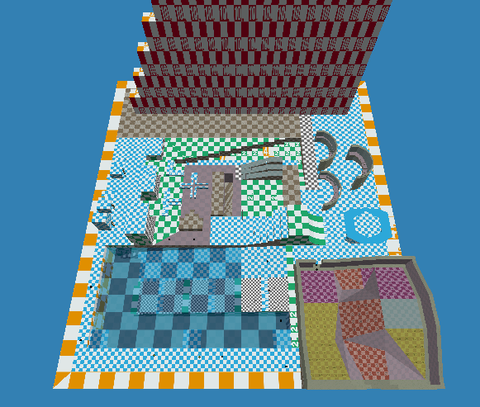 This archive is called Amos_T, which stands for Armos_Test. It contains a test map with a variety of terrain for Link to scramble over, including steps, ramps, ladders, crawl spaces, slippery floors, and a pool of water. The textures in this map are recycled from an identical test room in Super Mario Sunshine. 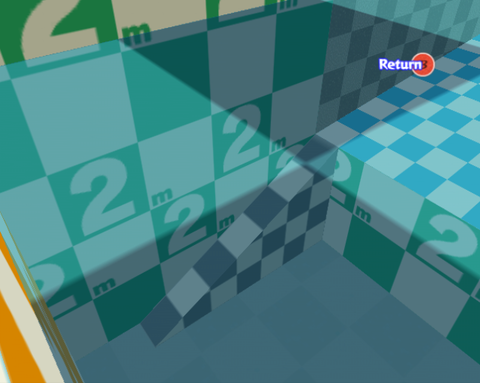 Notably, the water is transparent, an exception to the opaque blue of the water in the final game. There is also walkable terrain at the bottom of the pool. This may have been used to test the Water Boots, an item akin to the Iron Boots from Ocarina of Time that was ultimately cut from the game. 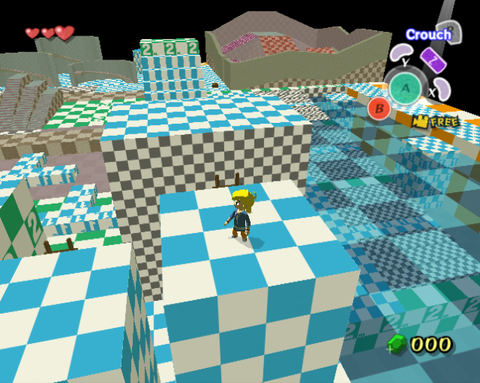 The Great Sea conceals a featureless, invisible plane not so far below the surface of the water. Using cheat codes, it is possible to walk on it. 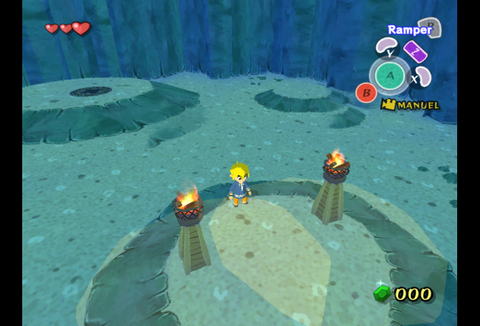 This archive is called Cave06. It contains what appears to be an early version the Savage Labyrinth's final room.

In the final version of the area, a treasure chest holding a Piece of Heart sits in plain sight. However, in Cave06, Link is required to play the Wind's Requiem to make the chest appear.

Leaving via the exit spawns Link at the Savage Labyrinth's entrance on Outset Island.

This archive is called Cave08. It contains early versions of three Wind Temple rooms, with darker, flatter lighting. The game's map select refers to the archive as "Makar Kidnapping Test", indicating that it was likely used to test Makar's kidnapping by Floormasters.

The final versions of the rooms are contained within an archive called kaze, which translates to wind. A detailed comparison between their early and final versions can be found below. 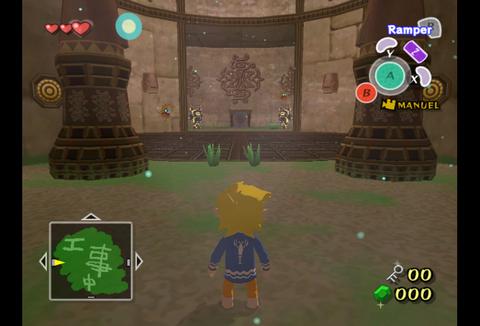 The early version of the area is missing a button that controls a grate. 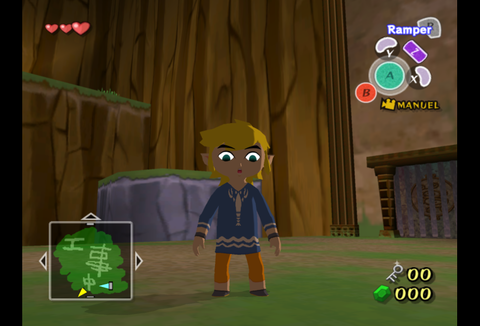 This area is the main room of the Wind Temple.

Most obstacles, such as the Peahats and the spinning blades on the room's outer edges, are found in different locations in Cave08.

The stones in the early version of Makar's prison cell were later replaced with grass.

In this early version of this area, Link was required to stomp on a switch with the Iron Boots to make the treasure chest near the room's ceiling appear. In the final version, the chest does not need to be triggered.

Finally, a door that leads to a key is blocked in Cave08, requiring Makar to plant two of his trees to open it. In the final version, the door is freely accessible. 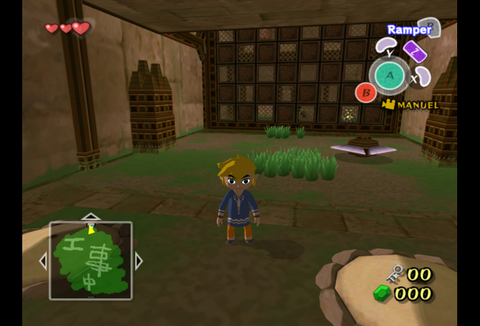 This early version of this area is missing a chest that contains one of Tingle's statues. In the final version, the location of the chest is illustrated by the small red cube at the top centre of kaze's map. 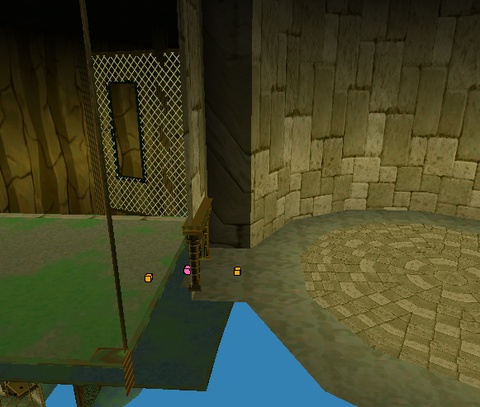 Cave08 also contains a file called Stage.arc. It is an early version of the Wind Temple's DZS file. "DZS" stands for "Zelda Stage Data", and defines map contents such as doors and chests.

A spawn point for Link is still present in the used Room 07 at the door's former location, though it is embedded in the ground.

In this early version of this area, a Purple Rupee could be found where the Compass now sits.

The Dungeon Map found in this early version of this chamber was later replaced by an Orange Rupee. In addition, the Compass was once found where the Dungeon Map is presently located.

The second floor of the dungeon doesn't appear to have changed between this early version and the final.

This archive is called Cave11. It contains 21 rooms intended for the Savage Labyrinth on Outset Island. Link must enter each room of this subterranean dungeon and defeat the enemies lurking within. By this process, he extinguishes a wall of fire surrounding a pit that leads to the next level, where more challenging foes await.

At least 5 of the rooms in this archive are unused copies of existing areas, linked together to form a very long cave. The doors embedded in their walls serve no purpose. Falling into some of the flaming pits brings Link to a used room, while falling into others results in the game crashing.

This room features 6 proximity-activated Yellow Chuchus that drop from the ceiling when Link gets too close. Leaving the room via the pit spawns Link in Level 28 of the Savage Labyrinth, which contains 3 Armos and a Wizzrobe. This indicates that the unused room was likely intended to be Level 27. The final version of Level 27, in comparison, is populated by 2 Green Bokoblins and a Darknut.

This room features 4 Armos. Leaving the room via the pit spawns Link in Level 29 of the Savage Labyrinth, which contains 2 Armos Knights and 2 Red Bubbles. This indicates that this unused room was likely intended to be Level 28. The final version of Level 28, in comparison, is populated by 3 Armos and a Wizzrobe.

This room features 2 Armos Knights. Leaving the room via the pit spawns Link in Level 30 of the Savage Labyrinth, which contains 2 Darknuts. This indicates that this unused room was likely intended to be Level 29. The final version of Level 29, in comparison, is populated by 2 Armos Knights, 2 Red Bubbles, and Bomb Flowers. The Bomb Flowers may have been added to ensure that the player would still be able to defeat the Armos Knights if they ran out of Bombs. 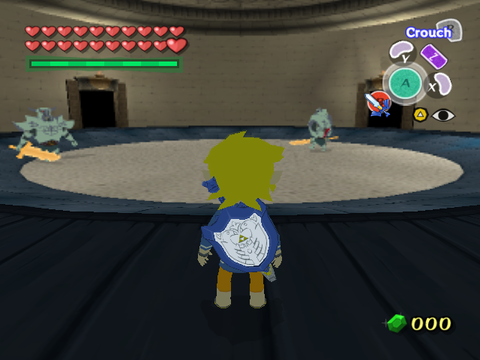 This room features 2 patrolling Darknuts. Leaving the room via the pit spawns Link in Level 31 of the Savage Labyrinth, which contains a Triforce Chart. This indicates that this unused room was likely intended to be Level 30. The final version of Level 30 is also populated by 2 Darknuts, but they are proximity-activated and do not start moving until Link approaches them. 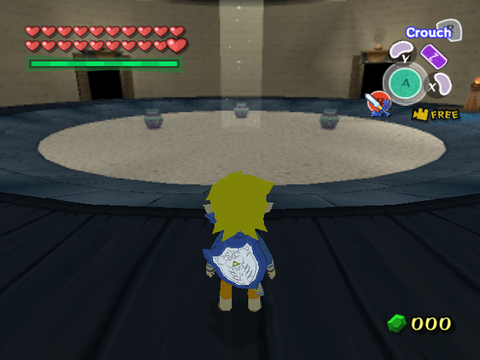 This room features 3 pots containing a grand total of 72 Rupees, as well as a sparkling warp. Leaving the room via the pit crashes the game, but exiting via the warp spawns Link in Level 1 of the Savage Labyrinth, which contains a pot with 3 Fairies. This indicates that this unused room was likely intended to be Level 31. 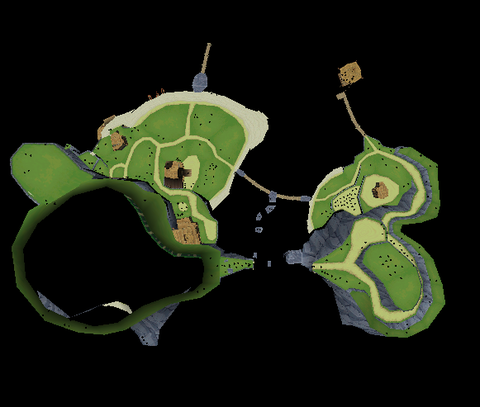 This archive is called DmSpot0, which translates to CutsceneSpot0. It contains an early version of Outset Island shown at E3 2002. A video of Link exploring this unused island can be seen here. 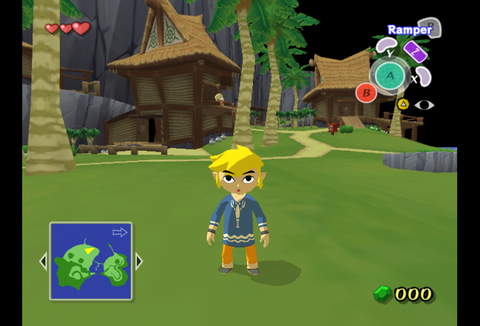 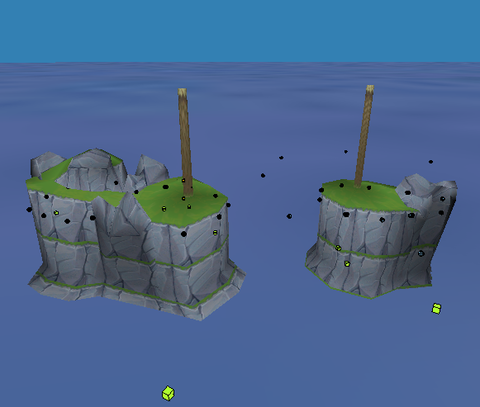 This archive is called E3ROOP, which translates to E3LOOP. It contains an early version of the Boating Course islands. Its filename indicates that it was used at E3. 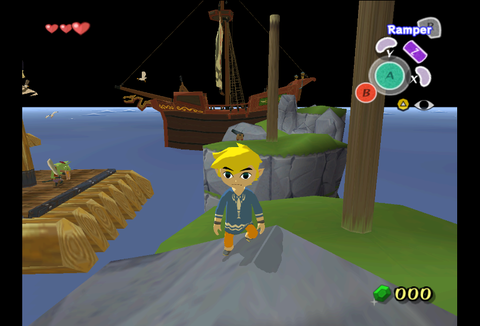 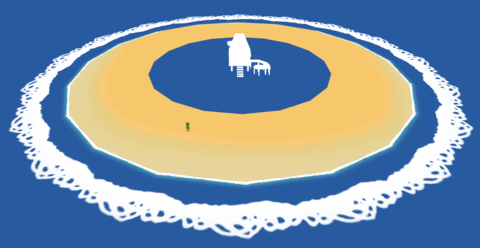 This archive is called Ebesso, which translates to EVilla. It contains a lonely island with an untextured house sitting in the middle of a circular shallow pond. Both its contents and filename indicate that it is an early version of Link's Oasis. 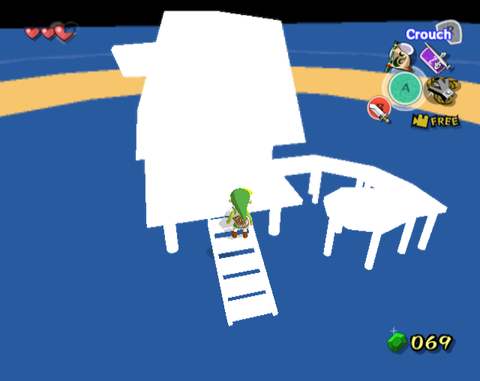 The house cannot be entered. Should Link attempt to walk up the stairs, the area resets as though he had fallen into a bottomless pit. 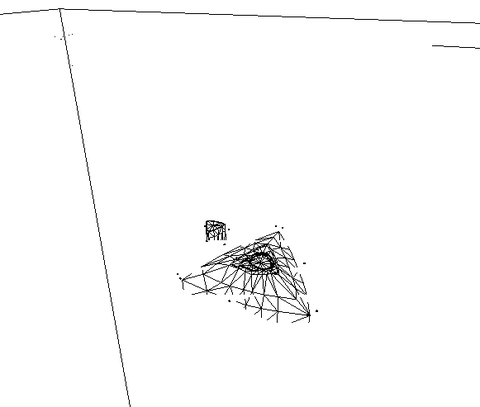 This archive is called ENDumi, which translates to ENDsea. It contains an early version of the scene in which Link and Tetra regain consciousness to find themselves floating on the ocean's surface following the final battle. The map uses the collision mesh from the three Triangle Islands. However, the islands themselves are invisible, as their models are missing.

Tetra can be seen standing on one of the islands, while Aryll can be found on the pirate ship wearing her purple Second Quest dress.

This archive is called GanonC. It contains several Ganondorf-related areas. 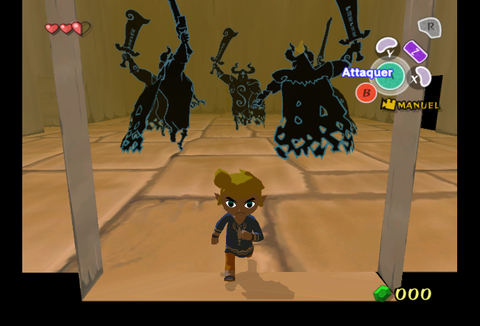 This area is a copy of the Wind Chamber found in Ganon's Tower. 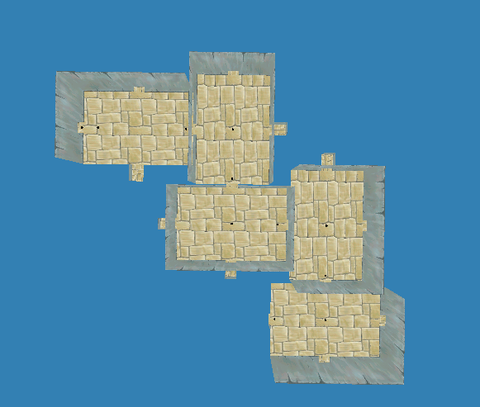 These areas are comprised of an early version of Phantom Ganon's maze. One of the rooms contains an exit that leads to the map for Link's rematch against Kalle Demos. Other exits lead to the temple-themed challenges found in Ganon's Tower. 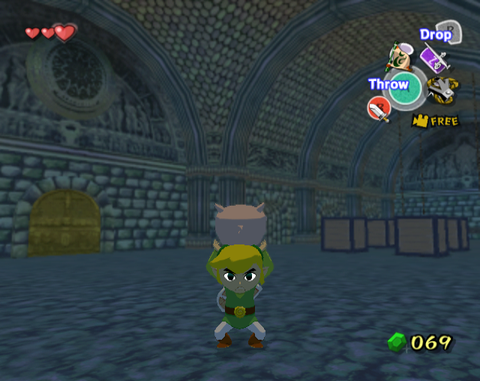 This archive is called H_test. Because the map is stored alongside the maps of the Hyrule overworld and Hyrule Castle's interior, the "H" may stand for "Hyrule". It contains a large cathedral-like chamber whose textures don't quite fit the cartoony, cel-shaded style of the final game. 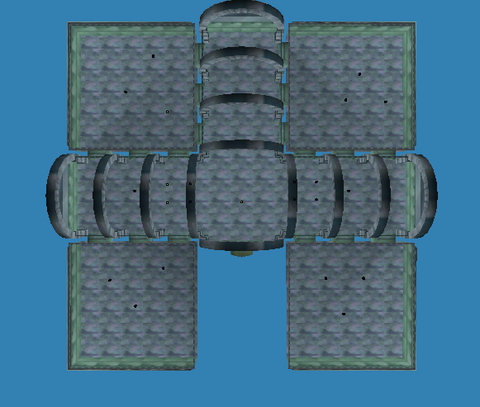 The game's map select refers to the archive as "Event Camera - Test Room". Its object set includes crates and a herd of adorable pigs.