This is a sub-page of The Simpsons Game (PlayStation 2, PlayStation Portable, Wii).

This game had a rather extensive debug menu during development, it's no surprise a decent amount of the options can still be found and re-enabled in the final release.

Some options may work better if they're toggleable with certain manually bound controller inputs.

For example, to bind the Player.FlyCamera PS2 EUR option to R3+UP for enabling it and R3+DOWN to disable it using the Player 1 controller, you'd write something like this: 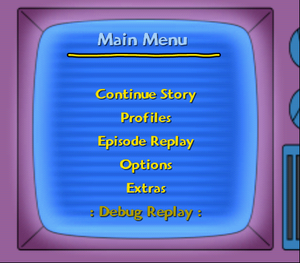 : Debug Replay : button in the main menu on PS2 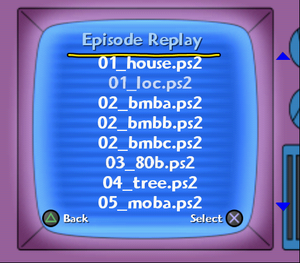 Contents of the : Debug Replay : menu on PS2

This option adds a : Debug Replay : button on the main menu, which lets you select and load any level that exists on the disc.

The PS2 version also includes two test maps that aren't present in the final releases disc and the PSP version for some reason includes the language files in the list. Attempting to load either of these will crash the game! 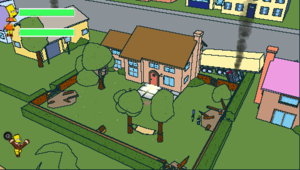 Lets you freely move the camera around the currently loaded environment. 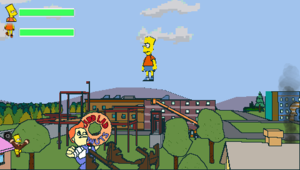 Lets you fly around the current environment.

Just like above, except this time you won't be restricted by invisible barriers and walls.

When toggled, it Teleports all the friendly characters currently available to the selected Simpson.

Note: The value is a floating point number!

The default value is 3F800000 (1). Changing this value affects the game speed, AI, speech frequency and just about everything that depends on the speed of the game. 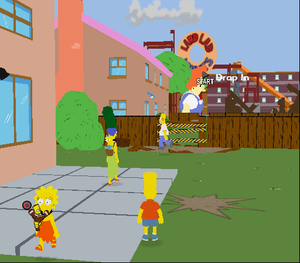 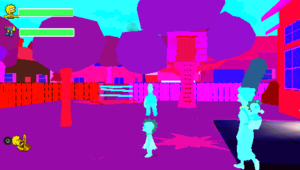 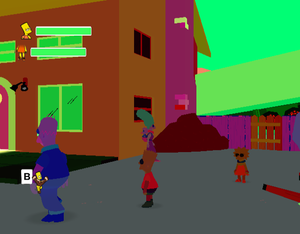 Disabling it doesn't work properly on PSP and Wii, but when disabled on PS2 it correctly disables all the lines without much discoloration.
...Marges hair turns green for some reason 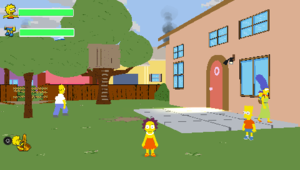 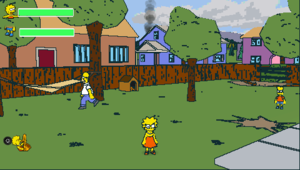 Everything outlined on PSP

Hides all the outlines in the game, only available for the PSP version.

And in stark contrast to the ForceNoOutline and EnableLines options, there's another PSP exclusive option that outlines pretty much everything in the world. It doesnt seem to have any actual debug name. 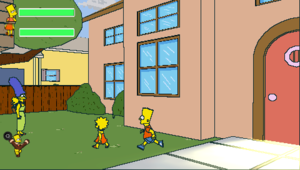 LineMaskDistanceThreshold with a low threshold on PSP

This option has a different name in each release:
PS2: Rendering.LineAlphaMaskThreshold
PSP: Rendering.Outline.LineMaskDistanceThreshold
Wii: Rendering.MaskTreshold

Note: The value is a floating point number on PSP!
On PS2 and Wii it's some unusual 4 byte type, where the upper half doesn't seem to even matter. (Needs more investigation™)

It reduces the distance from the camera for objects that need to hide outlines, such as the characters.

The default value is 0020 (32), setting it higher will eventually remove all outlines but if it's too high, it'll outline more sections. Setting it lower will also just make more outlined sections.

The actual threshold level seems to change every now and then, but the default stored value is 41F00000 (30) and its effects start becoming visible on the currently selected Simpson if the value is set to around 6 (40C00000) or lower.

There's also a LineMaskDistanceThresholdEnable option for the PSP which is enabled by default, but disabling it will prevent any of the effects of the float values from becoming visible. 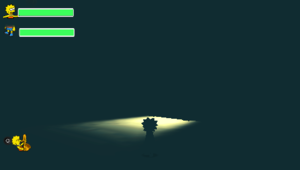 PSP exclusive. If this option is enabled simultaneously with ForceNoOutline, it doesn't produce any effect and is overridden by the No Outline effect instead. 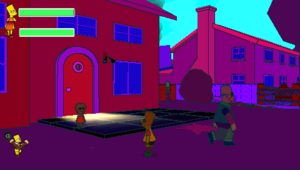 This option is enabled by default and disabling it gives some interesting results. Also PSP exclusive.