The Town With No Name

The Town With No Name is a parody(?) of Western movies, and... Well, it's a bit hard to explain.

Some claim it's a shoddy game made for a dying console (the CDTV) and one of the worst games of all-time (what with the poor art and voice acting, bizarre dialogue and gags, and rudimentary gameplay - not to mention its creators trying to distance themselves from it), while others think it may be one of the first examples of a shitpost/joke game that somehow got published (see the art, voice acting, dialogue, gags, and gameplay).

While we may never know which one it is since the game's development is shrouded in mystery, two things are certain about it: it's entertainingly bad, and it has unused content. 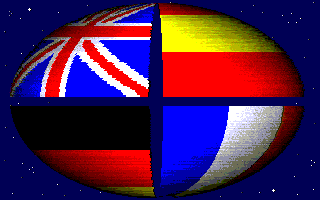 An unused language select screen, known as "FLAGS" in the graphics files. It can be accessed in-game by replacing another "SHOT" file with the file "LINGOSHOT", though only clicking the UK flag does anything and even then it seems to just return you back to the title screen.

Still, it does suggest that there were plans to localize this game in some capacity, which is a bit surprising.

Found in the tutorial files. It was most likely supposed to be used while you're told about the action screen and you have to shoot Bernard the Bunny.

Several animations of Eb popping up from behind buildings and shooting. In the final game, Eb is not fought at all - the player character spares him instead.

An animation of the priest talking, accompanied by a few of the game's other characters. Judging by the name of the animation, it could have been used if the character makes a mistake or as an alternative game over.

The shop apparently had one more item besides baked beans: the Prospector's Gold Panning Kit.

An animation of the store closing. This may have been used the second time you go to it.

An alternate animation of the game's title. 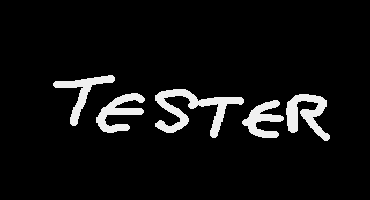 Some kind of placeholder image. 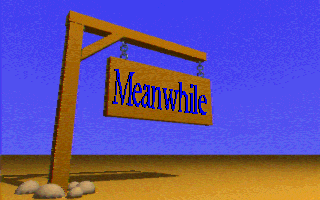 An unused version of the "MEANWHILE" splash card, on a sign instead of in the Back to the Future font. 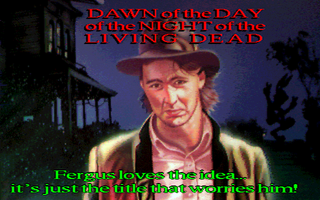 The first of an unused set of images likely intended for the "making of" bit. 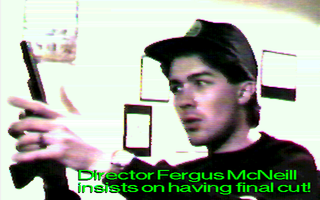 A rather confused-looking Fergus points at something offscreen while holding a gun incorrectly. It is very similar to the used images in tone. 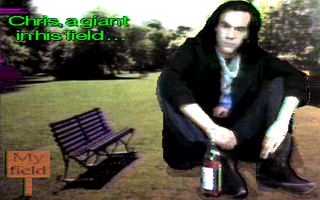 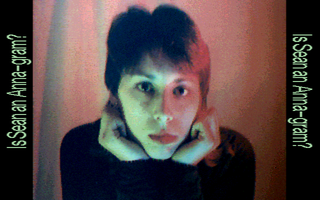 Probably some sort of inside joke from Delta 4. 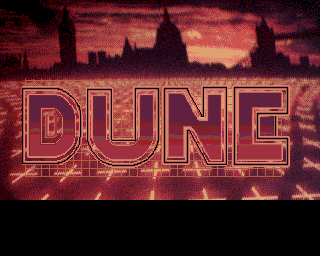 The logo for the D.U.N.E. (Developers Universal Non-programming Environment) software is present on the disc, perhaps indicating that the game was developed using said program. 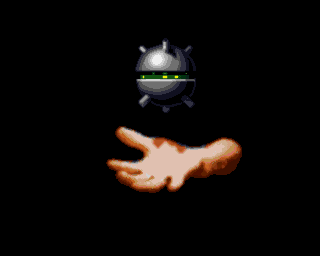 A picture of a hand under a mine. Judging by the filename and location of this file, it probably has something to do with the Chaos in Andromeda promotion in the "Special Mystery Option!". 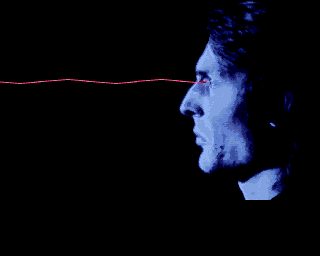 A man either shooting a laser out of his eye or being shot in the eye with a laser (it's hard to tell). Probably also to do with the Chaos in Andromeda bit. 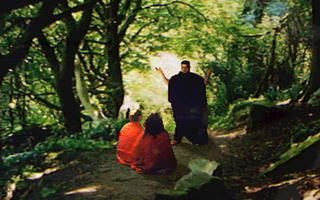 A black-cloaked man doing something with two children wearing orange cloaks in a forest. Present in the same folder as the previous two images, but it seems more like something for something else entirely.

Quite possibly the weirdest image on the disc, which is saying something.

A calliope-like tune, purpose unknown. It does sound like it could've been used in the church, though.

A bizarre tune, purpose unknown. Possibly intended for either the "Making of..." bit or the "Special Mystery Option!", which share the same music.

Probably an early version of the saloon jingle, or a loop for when in the saloon.

Most likely meant for the upstairs area in the saloon.

Several unused sound effects can be found. Where some of them could've been used is a mystery.

Low-quality takes of the game's dialogue exist, likely from before the switch to CD audio. If you thought the final game's voice acting was poor (in both general audio quality and the actors' own delivery), it could've been even worse.

The tutorial narrator referencing a status feature that is not present in the game.

The entire tutorial script, but narrated by the priest.

A pair of pieces of dialogue for the bartender. The second one could have been used either after successfully catching the drink or after having sex with the prostitute again, since the man with the beard says the second time that the player has ammunition right before the bartender's line.

The CDTV and DOS versions contain some minor differences, mainly in the audio.

The opening scene uses a remix of the The Good, the Bad and the Ugly theme in the CDTV version, while the DOS version plays two different tunes in short loops.