The Twisted Tales of Spike McFang

The Twisted Tales of Spike McFang is a relatively obscure, quirky and light-hearted action-RPG (compared to its peers on the SNES). It details the often-sidetracked journey of a young vampire prince and his companions as they attempt to stop a pervasive evil force from conquering the world. Pretty decent! Few outside Japan know, however, that the game was preceded by the rather unremarkable PC Engine platformer Makai Prince Dorabocchan (1990) and followed by the SNES sports title Super Naxat Open: Golf de Shoubu da! Dorabocchan (1994), where most of the Spike McFang cast return in what is presumably a blood-thirsty battle to the death.

A prototype version from late in development has also been released. 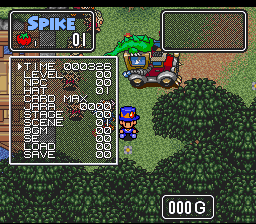 The US version had various changes made, ranging from censorship to difficulty adjustments.

The shopkeeper was originally a pretty blonde girl with a unicorn horn. In the American version, she was changed to a radish-like mummified creature, presumably because of her large bust.