The Untouchables is an NES game based on the 1987 movie. Because as we all know, adapting R-rated films into (somewhat) family-friendly NES games is a good idea.

To enable Scene-skipping, complete at least Scene 1 and enter "XVQ" as your name in the hi-score table. Continue the game, then on the stage number screen press Up + A + B. You'll be sent back to the title screen, but upon pressing Start you'll go to the next level. This can be continued until you reach Scene 7, after which the code will no longer register.

Oddly, doing this trick in the Japanese version will skip Scene 3. 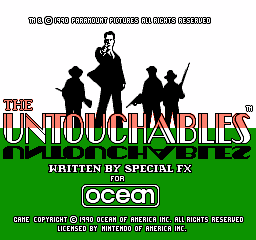 The game's developer, Special FX Software, was originally supposed to have been credited on the title screen. The unused tiles fit perfectly in the blank space between the title and the Ocean logo. They were still credited at the end of the game, however.

The Japanese version has the Altron logo and less copyright info below it. For the Revision 2 version, the title screen was completely redesigned, a separate copyright screen was added, and the copyright dates were bumped up to 1992.

The Japanese version shows a red "Area Clear" sign after beating each Scene, but before the newspaper headline.

In the US and Japanese versions, Scene 2 is "The Warehouse" (a platformer where you shoot men in gray hats to get evidence) and Scene 3 is "The Border Raid" (a shooter where you get evidence from gray bottles). The Revision 2 version appears to have swapped them, as Scene 2 is "The Border Raid", but the Scene-skipping trick bypasses Scene 3 entirely.

A minor bug is present in the Revision 2 version, where the Scene-skipping trick goes to "The Warehouse" before "The Border Raid". This is likely due to a programmer oversight.