Tin Star is a robot western shooter where you play as the eponymous sheriff. Designed in part by Marcus Lindblom, better known for his work on the localization of EarthBound, the game can be played with your standard SNES controller, the Super Scope, or SNES Mouse. 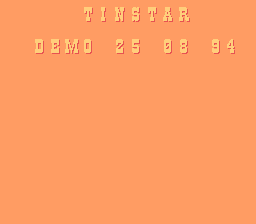 Programming for this unused title/boot screen (showing a build date of August 25, 1994) is located at SNES address $80BB90-80BBFD. It can be accessed by using Pro Action Replay (PAR) code $80BB8FEA and then selecting a game to load.

The programming for the above demo screen contains an unfinished region check. The game loads the video mode status from register $213F, but does nothing further with it before jumping to the demo text display routine. The region lockout text is present, however.

No pointers to the two above strings were found.

When the same .TBL file used by text elsewhere in the game is applied, it translates to the following:

However, it might have supposed to be J.L.D.P.BUCKLEY! instead, which is found in Plok. The first two initials could be John and Lorraine Buckley, the former of which is credited as the Main Programmer for this game. The other initials are currently a mystery.