V-Rally 2 is a car racing game developed by Eden Studios. It is available for Windows, Dreamcast, and it has a slightly different version for PlayStation.

Service areas have their own tracks. These tracks' files aren't totally unused, as they are loaded for the animation when finishing a rally track, but in normal gameplay you can't see more than the car entering to the small area in a fixed camera angle. Modifying the text file "rootspec.scr" in the Windows version can make one of these tracks replace another track. This allows access to them like a normal track, and makes some unseen stuff like unfinished buildings visible. 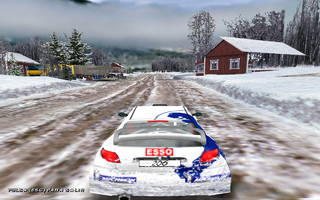 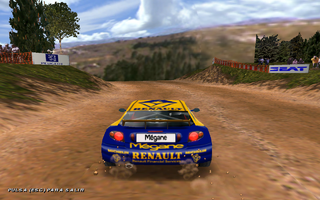 These tracks have no ending and no starting, but they have collision at limits so you can't fall when reaching the end of the track. At the walls, collision exist, but it's a bit glitchy.

There is a completely unused sound file for the menu. For English, the file name is "dspk01ge.grp". It strangely finishes with a duplicated co-pilot phrase which is only used in "dcopm**.grp".

Co-pilot sound files also have unused phrases like "water" (Ex: There's no water in any track in the game).

These unused phrases exist for every language for male and female co-pilot.

Two unused background images are present in file menucommon.zap from the Windows version.

The first one is a language selection screen from early in development, where we can see the working title for the game, Millennium Edition.
This background can be seen in the V-Rally 2 Dreamcast prototype. 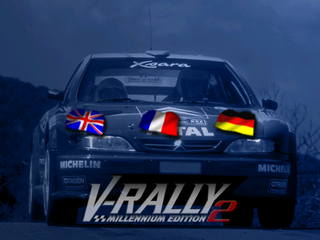 The second one is a picture of what seems to be the development team. 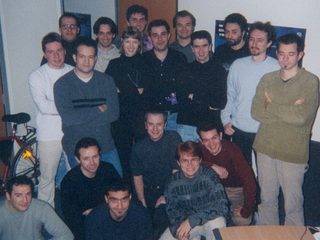 When racing with damage enabled, some car textures like the car bonnet change to using a damaged texture.

The roof, front glass, and rear glass of all the cars also have damaged textures. But in the final version, these textures never change. Here are some examples:

The damaged front glass for this car uses an early design.

In the file menucommon.zap, we can find some unused textures for game controllers. From left to right, these appear to be the Jogcon, the NeGcon, and the Madcatz Dual Force.

In the Windows version of the game, there are lots of unused and unreachable code routines to show debugging information on the screen, or changing the game behaviour.

These HUDs can be re-enabled by calling the following routines from the main loop of the racing code (for example, the routine at 0x4721c0). Some of them are:

0x437050: Car Module
Prints information about the car's current xyz position in the map and "bloc". It also prints 9 matrix values, and some "bloc" information like its position and address.

0x437380: Car Info Module
Shows information about car speed and wheel rotation. It also shows when the suspension is at the limit, and the amount of damage when the car collides. 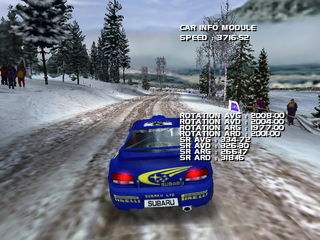 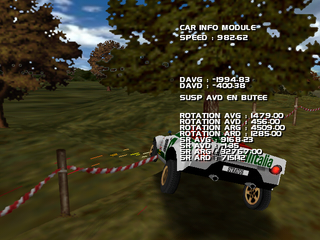 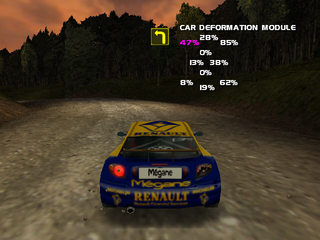 0x437A90: Car Dirt Module
This HUD is related to the dirt layer opacity. ALPHA ENV is a byte variable (0-255) that decreases until 0 when the car moves. When ALPHA ENV value reaches 0, the ALPHA DIRT value starts increasing from 0 to 255 when the car moves, being 255 the maximum dirt the car can have. 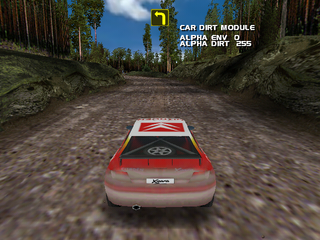 There are several debugging routines used during development that were left unused in the final game:

A debug menu is still present in the Dreamcast version of the game. This debug menu can be accessed using the GameShark code: FB099739 0000FFFF.

Apart from the intro video, there were plans for another video sequence in the game that would be placed at CdEuro/movies/VR2_pikes.mpg in the Windows version. There's also an unused routine that plays the video (that must be placed in the game folder first) at 0x438900.

There are a lot of references in the game's files for two cars that been removed from the final game. These cars are Volkswagen Golf in category KITKAT 2L (incorrectly named "Wolfswagen") and Ford Puma in category 1L6. These references can be seen in scripts from "scripts.zap" and text files "rootcars.scr" and "rootIA.scr" where you can see all the cars, and these two have their lines commented out.

In the "rootgame.scr" file from the PC version, we find:

There are lots of text files in the PC version where we can see early names for some countries in the game. In all the text files, Spain was named Catalogne (Catalogne is French for Catalonia, an autonomous community of Spain) and France was named Monaco. It's possible Monaco would be another country for the game (France special lap seems to be made from Monaco's graphics being the only special lap with diferent ambientation). A half of the text files have England named as RAC.

We can see on rootspec.scr a reference to a test lap used during development. It was named SS01 test and it later became SS07 CORSICA maintaining identical configuration.

The main Windows executable file contains over 100 development messages in French. Most of them are directed to someone called "Sammy". Here are some of them:

There are references to ALL the .c files used to compile the game within the Windows executable. The entire path for each file is included too. Some file examples are:

There are lots of script files inside *.zap packed files, they are fully commented with notes including developers names.