Vegas Dream lets you live the dream of gambling in Vegas all while avoiding swindlers, falling chandeliers, and nasty spills down the stairs.

Input the following code at the game select screen:

A sound will confirm a correct entry, although you only have one chance in the US version (if you mess up or press any buttons beforehand, the code will not register and you'll have to reset). Then, you can enter one of the following debug modes. 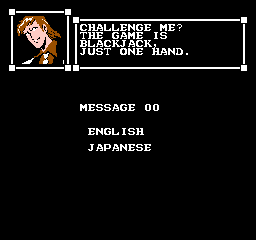 Hold A + B and press Start to enter "MESSAGE TEST", which lets you view all the dialogue. The Japanese version has both English and Japanese, which can be toggled with Select...although oddly, the Japanese version uses the English dialogue in-game.

Hold A and press Start on "Black Jack" to see the ending. 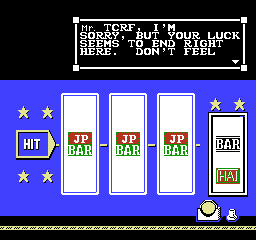 Hold A and press Start on "Roulette" to trigger a game over. In "Vegas Dream" mode, this brings up the Lucky Slot machine which appears after you've lost all your money, giving you a second chance to continue playing. In "One Spot" mode, it instead takes you directly to the "game over" screen, followed by the title screen. 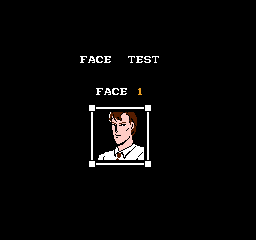 Hold A and press Start on "Slot Machine" to view the character portraits. 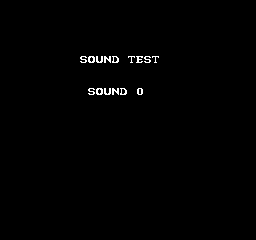 Hold A and press Start on "Keno" for a basic sound test.

There's a version string in the ROM.

The Japanese title screen has a larger main title font, which results in the bottom row of stars not being present, and the Viva! cuts into the stars as well, removing what would be the middle-right four stars. Additionally, the "PUSH START BUTTON" text is moved up to accommodate the copyright string and logo. The Epic logo is still loaded into memory at the title screen in the US version, though.

The Epic logo was again removed from the game select screen.

The Epic logos on the slot machines were changed to HAI (HAL America, Inc.), a comma was added to the Lucky Slot text, and the comma graphic itself was shifted down by one pixel.

On the circuit board there is an unused area for a battery, suggesting the possibility of a battery backup instead of a password system